Previously we discussed a recent written BBC article concerning the surge in Coronavirus cases in the Gaza Strip:

In the three days following the publication of that report listeners to BBC World Service radio heard at least three items relating to the same topic. 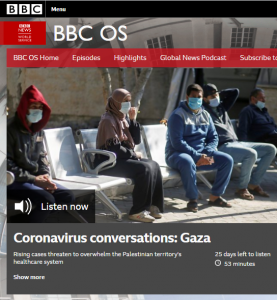 “Rising numbers of coronavirus cases threaten to overwhelm the healthcare system in the Palestinian territory of Gaza. We’ll speak to people who live there about their experience of the pandemic, as well as getting context from a BBC journalist.”

Presenter Nuala McGovern began the item (from 27:49 here) by introducing the BBC Jerusalem bureau’s Yolande Knell along with one of the BBC’s recurrent talking points.

McGovern: “…I want to turn to Gaza. Ahm…we were mentioning that the health system could be days away from being overwhelmed by this increasing volume of Coronavirus cases and the Palestinian territory it’s incredibly densely populated so we got our correspondent Yolande Knell who has been following developments from Jerusalem to talk us through how she sees the situation.”

Knell began by quoting “the local head of the World Health Organisation” who was also quoted in the BBC’s written report, along with other similarly unnamed “doctors” and “public health officials” whose relevant political affiliations were not clarified. She went on to mention that the hospital dedicated to treatment of Covid-19 patients in the Gaza Strip has “got 70% occupancy” and that “the WHO has said […] it has got more ventilators on the way…15 more ventilators coming this week” – as indeed was the case.

McGovern then brought up another frequently promoted BBC talking point.

McGovern: “Some of the people that I’ve been speaking to today, they blamed the blockade by Israel…ah…for making the situation with the pandemic even worse. How does the political situation have an impact on the territories?”

As we have previously observed, many of the BBC’s earlier reports have promoted the false notion that the state of healthcare in the Gaza Strip is primarily attributable to counter-terrorism measures imposed by Israel and Egypt following the 2007 violent take-over of the territory by the terrorist organisation Hamas. The BBC serially fails to inform its audiences that the restrictions imposed by Israel on the entry of goods and materials to the Gaza Strip are confined to dual-use items – i.e. those which can be used for the purpose of terrorism – and do not include medicines.

Knell: “I mean in many ways. If you talk to doctors in Gaza they’ll bring up the fact that they have really serious drug shortages there, a lack of specialist equipment, a lack of specialist training for medics. And this has got a lot to do with the fact that Gaza – of course it’s governed by the militant group Hamas – it’s been kept for more than a decade now under blockade by Israel and Egypt which say they have security concerns, that their aim is to stop weapons getting to Hamas. But this means that the flow of goods is very, very controlled into Gaza and it’s also very difficult for people to move in and out.”

Only later did Knell throw in the following:

Knell: “They’re [the WHO] trying their very best to get in drugs but it has been another issue I should say and because of the internal Palestinian political divisions, this has also led in the past to problems getting the drugs that are needed into Gaza and equipment for the hospitals.”

Clearly that in no way adequately informs audiences that the reason those euphemistically portrayed “internal Palestinian political divisions” – i.e. the Hamas-Fatah split – have resulted in a chronic shortage of medical supplies is because the Palestinian Authority has used that and other methods to put pressure on Hamas.

Knell’s promotion of talking points also included additional references to “the very weak healthcare system and the broken economy in Gaza” along with the statement that “the economy is just so fragile […] people are so poor – this is a densely populated place as well”.

Unsurprisingly, Yolande Knell had nothing to tell BBC World Service listeners about Hamas’ prioritisation of terror over civilian welfare.

McGovern: “But now let’s hear the experience of two young women who live in Gaza. I spoke to them earlier. Farah Baker and first Nadia Abu Shaban.”

Readers may recall that during the summer 2014 conflict between Israel and terrorist organisations in the Gaza Strip Farah Baker – then 16 years-old – was featured in BBC content despite her penchant for antisemitic imagery. Obviously Baker’s record of offensive comments on social media is still not considered by BBC World Service radio reason to refrain from providing her with a worldwide media platform.

During McGovern’s conversation with the “two young women” listeners heard context-free references to “living under aggression most of the times” and “Israelis attacking Gaza” along with “deep economic recession”. Audiences were told that people in the Gaza Strip comply less with Covid-19 regulations because “they grow up in a society and in a community that suffer from aggression”  and that claim was reinforced by McGovern who stated that “many people feel oppression”. Farah Baker promoted the unevidenced claim that people in the Gaza Strip are less likely to get a vaccine against Covid-19 “because of the blockade and the financial deficits here and the poverty rate”, opining that vaccinations should be given to Gaza Strip residents for free.

The following day – November 25th – listeners to BBC World Service radio’s ‘Newshour’ programme heard another item about Coronavirus in the Gaza Strip when presenter James Menendez conducted an interview (from 45:04 here) with a representative from a political NGO.

Menendez: “The fragile healthcare system in the Gaza Strip could become overwhelmed by a Coronavirus outbreak according to experts there. New cases in the Palestinian territory reached a daily record of nearly 900 in one 24-hour period over the weekend. Mahmoud Shalabi is a nurse in Gaza and he works for an organization called Medical Aid for Palestinians. I asked him first of all why the sudden increase in cases.”

In breach of BBC editorial guidelines on impartiality concerning ‘contributors’ affiliations’, listeners were told nothing of MAP’s “affiliations, funding and particular viewpoints”.

Shalabi (whose CV does not show any record of him being qualified as a nurse) opened with the population density talking point which went unchallenged by Menendez.

Listeners were also told that the Hamas-run ministries in the Gaza Strip cannot impose a full lockdown because “people are poor” and such a measure would “break the economy, which is already broken” along with a context-free reference to “a blockade for more than 14 years now”.

Audiences however heard nothing about the terrorism which necessitates that blockade and which is prioritised by Hamas at the expense of public services and welfare, including healthcare. 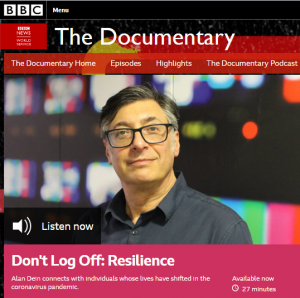 A similarly context-free account was heard in another BBC World Service radio programme aired on the same day. In a programme described as “factual” called ‘The Documentary’ presenter Alan Dein ‘connected’ with a person presented only as “Mohammed in Gaza” (from 11:48) who recounted how – obviously like millions of other people in the world – his travel plans had been postponed because of the pandemic while making context-free references to “a tank”, “a soldier”, “buildings turned into ashes” and the fact that the Gaza Strip has no functioning airport or trains.

It was recently reported that the BBC has become the lowest-ranked British news provider on impartiality, according to OFCOM. These three items aired on BBC World Service radio serve as examples of how context-free promotion of a chosen narrative, inadequately presented contributors, unchallenged promotion of the agendas of NGOs and political activist interviewees and the failure to meet the simple practice of adequately identifying a person given a BBC platform harm the BBC’s claim to produce impartial news and current affairs coverage.