Courtesy of the Guido Fawkes website comes an item concerning the assassination of Mohsen Fakhrizadeh in Iran which was aired on the BBC News Channel on November 30th.

The BBC presenter introduced his interviewee as follows: [emphasis in italics in the original]

“Joining us is Dr Trita Parsi, an Iran expert and executive vice-president of the non-partisan think tank the Quincy Institute for Responsible Statecraft.”

As Media Guido pointed out: 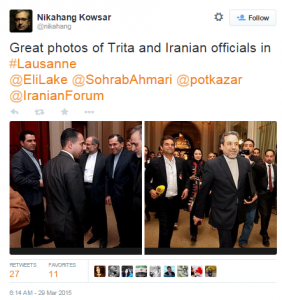 “In fact Parsi is a well known advocate for the Iranian regime. Parsi left his former organisation after being found by the US courts to be advocating for the Iranian regime, when he attempted to sue a blogger for saying his organisation was lobbying for Iran in America. The court found in 2012 that the work of Tritra Parsi was “not inconsistent with the idea that he was first and foremost an advocate for the [Iranian] regime.” […]

A quick google by BBC researchers would have found this front page Washington Times article which says that analysis of “e-mails between Mr. Parsi and Iran’s ambassador to the United Nations at the time, Javad Zarif – and an internal review of the Lobbying Disclosure Act – offer evidence that the group has operated as an undeclared lobby and may be guilty of violating tax laws, the Foreign Agents Registration Act and lobbying disclosure laws.””

When Jeremy Bowen recommended content produced by Parsi earlier this year we noted that:

“The author of the thread deemed “worth a read” by the BBC’s Middle East editor – Trita Parsi – was formerly the founder and president of the National Iranian American Council (NIAC), regarded by some as a lobbying organisation for the Iranian regime.

Parsi recently moved on to co-found the ‘Quincy Institute for Responsible Statecraft’ (which, inter alia, opposes the current US sanctions on Iran) and his thread promotes an article by that think tank alongside another by himself in his capacity as its executive vice president.

Jeremy Bowen of course did not bother to inform those who followed his advice and read the thread of its author’s record and agenda or of the fact that among his latest organisation’s ‘experts’ are Stephen Walt and John Mearsheimer (authors of ‘The Israel Lobby and US Foreign Policy’) and Lawrence Wilkerson – promoter of the conspiracy theory claiming that the use of chemical weapons in Syria could have been “an Israeli false flag operation”.”

Once again we see an example of the BBC’s failure to adhere to its own editorial guidelines concerning ‘contributors’ affiliations’:

Clearly the BBC failed to provide that “appropriate information” before viewers were told by the “Iran expert” that:

“…Israel is the most likely culprit here…”

“If the Iranians respond he [Netanyahu] may get the war that he’s been trying to start for more than a decade.”

Neither did viewers hear any challenge to Parsi’s claim that “…only the United States and Israel…” could have carried out the assassination or to his unproven assertion that “Israel did conduct” past assassinations of Iranian nuclear scientists.

Likewise no attempt was made by the BBC presenter to question Parsi’s claim that the real target of the operation was “renewed diplomacy between the United States and Iran” rather than Iran’s nuclear weapons programme.

This is yet another example of the disregard for editorial guidelines which explains why the BBC was recently given such a low ranking on impartiality in an OFCOM survey.

BBC FLOUTS ITS OWN EDITORIAL GUIDELINES WITH IRAN TALKS INTERVIEWEES