Last week we documented the BBC News channel’s promotion of commentary on the assassination of Mohsen Fakhrizadeh from Trita Parsi, the vice-president of a think tank wrongly portrayed as “non-partisan”:

On December 4th the BBC World Service radio programme ‘The Real Story’ – which self-describes as a programme in which “Global experts and decision makers discuss, debate and analyse a key news story” – aired an edition titled “Is Biden facing a new Middle East?”. 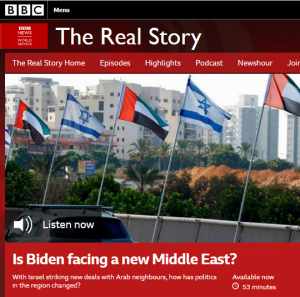 “The assassination of the Iranian nuclear scientist Mohsen Fakhrizadeh appears to have made life more difficult for President-elect Biden – yet another event to weigh up as he considers what to do about Donald Trump’s legacy across the Middle East. Over the last four years the Republican president withdrew from the nuclear deal with Iran known as the JCPOA, shifted the US embassy to Jerusalem, withdrew almost all American troops from Syria and refused to support a bill that called for a ban on weapons sales to Saudi Arabia because of its role in the war in Yemen. Mr Trump’s ‘maximum pressure’ strategy did not prevent Iran from conducting nuclear enrichment and the country remains an influential player in Syria, Iraq and Lebanon. Meanwhile the Abraham Accords between Israel and the UAE, plus Israel and Bahrain have not just normalised diplomatic relations, but also opened new commercial and economic channels between old foes. In an article this year Joe Biden wrote that his administration would stand up to authoritarianism and will place democracy back at the core of US foreign policy. But is that realistic in a region that has adapted to the policies promoted by Donald Trump? To what extent does the thaw in relations between Israel and its Arab neighbours impact America’s influence in the region? How much Obama-era policy can or should the Biden administration bring back? Join Ritula Shah and guests as they discuss whether Joe Biden is facing a new Middle East.”

The introduction to that programme was presented by Ritula Shah as follows:

Shah: “Back in 2018, just days before President Trump withdrew the United States from the Iran nuclear deal, the Israeli prime minister Benjamin Netanyahu stood before the world’s media and delivered a presentation. It was intelligence he insisted proved that Iran was developing nuclear weapons, proved that the country couldn’t be trusted, and he produced the name of a shadowy figure unfamiliar to many of us.”

Listeners then heard a recording of Netanyahu saying:

Listeners were not informed that the recording had been edited before Shah went on:

Shah: “Well that name disappeared back into relative obscurity until this past week.”

Listeners then heard a recording of a BBC news bulletin:

Newsreader: “One of Iran’s top nuclear scientists has been assassinated. Mohsen Fakhrizadeh died of his wounds after gunmen opened fire on his car…”

Next came a recording of additional commentary from an unidentified BBC journalist (apparently Paul Adams):

“Mohsen Fakhrizadeh has been described as Iran’s Robert Oppenheimer or the father of the country’s nuclear programme.”

That was followed by the following statements from an unidentified speaker:

“Israel is the most likely culprit here because the combination of political intent and capacity to do this really produces a list of only two countries: the United States and Israel. And Bibi Netanyahu has a clear interest in this. If the Iranians respond, he may get the war that he’s been trying to start for more than a decade. If they don’t, still it will really damage the prospect for renewed diplomacy under Biden.” [emphasis added]

Those statements were originally made by Trita Parsi in the interview he gave to the BBC News Channel four days earlier. Not only did BBC World Service radio not inform its worldwide listeners of the “affiliations, funding and particular viewpoints” of the person making those claims, it did not even bother to provide his name. Moreover we see that once again Parsi’s unevidenced, inaccurate and materially misleading allegation that the Israeli prime minister has been “trying to start” a war with Iran “for more than a decade” was uncritically amplified by the BBC for a second time.

Accuracy, however, does not appear to have been a consideration for Ritula Shah and the producers of this programme ironically titled ‘The Real Story’. Later on (from 34:32) listeners heard the following: [emphasis in italics in the original, emphasis in bold added]

Shah: “I want to move on to another big issue […] which is Israel and the Palestinians. In January this year President Trump, accompanied by the Israeli prime minister, launched a new plan aimed at solving the Palestinian question. It was described as the ‘deal of the century’ but noticeably there was no Palestinian representation during its launch. The Trump administration was heavily criticised for making all of Israel’s positions their own and critically it was alleged that the plan, if implemented, would put an end to the possibility of Palestinian statehood and the end, therefore, of the two-state solution.”

The US Administration’s ‘Peace to Prosperity’ proposal states: [emphasis added]

“Palestinians and Israelis alike deserve a future of peace and prosperity. A realistic two-state solution will protect Israel’s security, fulfill the aspirations of self-determination for the Palestinian people, and ensure universal and respectful access to the holy sites of Jerusalem.

In other words, Shah’s imitative portrayal of “that plan” (which, notably, fails clarify that the Palestinians boycotted it even before its publication) was inaccurate and misleading to audiences worldwide. It was however – just like the amplification of Trita Parsi’s falsehoods – obviously intended to advance the BBC’s chosen political narrative, regardless of the corporation’s supposed commitment to the production of accurate and impartial news and current affairs content.