Previously (see ‘related articles’ below) we have discussed six videos created by the BBC in 2004 (and still available in the UK) within the framework of its ‘Bitesize’ online study support resource which includes material relating to the GCSE exams taken by high school students in parts of Great Britain and Northern Ireland.

One of the sections offered under the history category is titled ‘The Middle East class clips’ and it includes seven videos. The seventh and last video (chronologically) is titled “The first Intifada and Palestinian consciousness”. 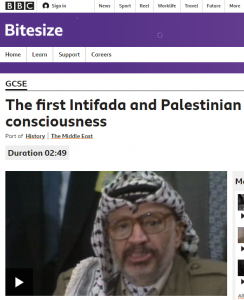 Like the previous videos, this one too is presented by the former BBC Northern Ireland journalist Noel Thompson. Its featured outside contributors are Dr Hanan Ashrawi – presented as “Member from Jerusalem, Palestinian Legislative Council” – and Amram Mitzna – presented as “Head of the Israeli Defence Force Central Command 1986 – 1990”.

Thompson opens the video with an account of the situation at the time which provides no explanation of the fact that Judea & Samaria came under Israeli control because Jordan – which had illegally occupied the territory since 1948 – had attacked Israel during the Six Day War. Ignoring efforts at the time to settle the Arab-Israeli conflict by diplomatic means, he erases Palestinian terrorism from the picture and fails to explain that Palestinians “forced to move to other countries” were deported due to terror related activities.

Thompson: “By 1987 tension in the territories was building to boiling point. Palestinians lived with the fear of losing their land and being forced to move to other countries and with the daily miseries of occupation. These pressures led to the first Intifada or mass uprising.”

Ashrawi: “It was a turning point because at that point Israel met its first real challenge in terms of the human spirit and the human will to endure and to defy oppression.”

Thompson: “The goal of the Intifada was to end that occupation and achieve independence from Israel.”

Mitzna: “It gave the Palestinians a feeling that they are able to do it and they have the power and their weakness is their strength. And of course it gave the Israelis…err…a view that it will be impossible to continue to occupy the territory without any permanent solution.”

The BBC’s video makes only a cursory reference to Palestinian violence during the first Intifada and completely ignores the topic of the nearly 1,000 Palestinians murdered by Palestinian factions.

Thompson: “The Palestinians refused to pay taxes and staged strikes and massive street demonstrations. But there were acts of violence as well and allegations that the Israelis had instructions to use brutal punishments.”

Thompson’s portrayal creates the inaccurate impression that the PLO was not involved in the Intifada.

Thompson: “The PLO leadership in exile watched the Intifada with alarm. They were in danger of losing their position as a leading player in Palestinian resistance.”

In fact the first Intifada soon came largely under the leadership of the ‘Unified National Leadership of the Uprising’ (UNLU) which was made up of local groups loyal to factions of the PLO, including Fatah, the DFLP and the PFLP.

Thompson: “Arafat rose to the challenge. He moved the PLO to support a two-state solution: a state for Israel and a state for Palestine.”

Recording Arafat: “While the Intifada escalates I declare we are ready. We are willing to negotiate peace.”

Thompson: “He went on to tell the world at the United Nations that the PLO renounced the use of violence.”

Recording Arafat: “We totally and absolutely renounce all forms of violence.”

Thompson: “For the US this was a turning point and it began dialogue with the PLO. But as far as Israel was concerned the PLO were still terrorists and there’d be no negotiation.”

Not only does the BBC’s film (made while the second Intifada was still in progress) erase the fact that the various groups making up the PLO did not “renounce all forms of violence” at all, it also completely ignores the Palestinian factions which are not part of the PLO – particularly Hamas and the Islamic Jihad – which to this day reject the two-state solution and Israel’s very existence.

Clearly this educational video gives British school students a superficial and incomplete view of the first Intifada itself as well as the origins of issues (such as the Hamas-Fatah split) which are still relevant today.