The UK public service broadcaster Channel 4 is airing a series marking the 250th anniversary of Beethoven’s birth featuring pianist Daniel Barenboim. Four days before that series began, on December 14th, the musician was interviewed (not for the first time) by Jon Snow on Channel 4 News. Unsurprisingly considering the record of the two participants, the topic of the four-minute segment promoted online was “Daniel Barenboim on a peaceful resolution to the Israeli-Palestinian conflict”. 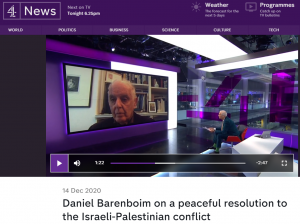 Particularly given that on the very same day Channel 4 News aired a nine-minute report (discussed here) by a “British Palestinian activist”, Snow began with a specious claim that was supported by his interviewee. [emphasis in italics in the original, emphasis in bold added]

Snow: “We’ve been talking to young Palestinians here in Britain and they feel their voices are simply never heard.”

Snow: “Well how do you change that? I mean has this got to last forever?”

Barenboim: “I cannot see it lasts forever. It will either change or it will end in a catastrophe. It cannot go on like this forever and I think the responsibility lies on both sides with of course greater responsibility on the Israeli side because they are the conquerors and the others are conquered.”

Viewers were not provided with any context concerning the events – including the actions of surrounding Arab countries – which led to Israel becoming “conquerors” before Snow went on to promote his ‘progressive’ agenda and false linkage.

Snow: “In this age of Black Lives Matter, righting historic wrongs, why is it impossible to have a meaningful conversation about Israel and Palestine?”

Barenboim: “Basically both sides accuse the other of stubbornness and lack of flexibility. The Israelis said the Palestinians didn’t accept the partition of Palestine. All the Arabs and the Palestinians say why should they; this is Arab territory etc, etc, etc. […] On the other hand the occupation by Israel is 53 years of the Palestinian territories; better said the Palestinian people. It is totally inexcusable and it does not allow for a dialogue. If you were occupied by somebody for 53 years, you wouldn’t want to talk to them either.”

Snow’s simplistic ‘why can’t they just get along?’ narrative continued:

Snow: “Now you’ve managed to bring together musicians from Israel and Palestine and create an orchestra. Why isn’t it possible to do that with politicians? Bring them together and develop peace.”

Barenboim: “[…] The peace can only be there when there’s justice for the Palestinians and security for Israel. […]”

Clearly Channel 4 viewers were not provided with anything resembling a public service by that trite, superficial and sadly unintelligent conversation which contributed nothing to public understanding of a very complex topic. Both Jon Snow and Daniel Barenboim have in the past used the media to promote their personal opinions and agenda on the topic of the Arab-Israeli conflict and this echo chamber interview failed to presented any novel content.

It did however again raise the long-standing question of why so many journalists appear to believe that the political opinions of people known for their achievements in the arts or other fields completely unrelated to Middle East history and politics merit air-time and column space.