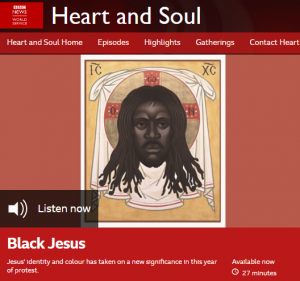 “The identity and colour of Jesus – and why it matters – has taken on a new significance in this year of protest and change. Seeing Jesus as a darker skinned Palestinian rather than blonde European is both historically accurate and theologically important, but it’s not a new idea.” [emphasis added]

The notion of Jesus as ‘Palestinian’ is repeated during the programme itself by its presenter Robert Beckford.

01:16: “Despite the fact it’s more realistic as a first-century Palestinian Jew that Jesus was dark skinned, somehow the white Jesus has become the most popular and accepted image.”

25:37: “The colour of Jesus matters, both literally and symbolically. A first-century Palestinian Jew had colour…”

Beckford is of course by no means the first to promote the notion of Jesus as a Palestinian, be that for political ends or as a result of lack of knowledge.

As CAMERA observed in 2008 when the New York Times claimed that Jesus ‘spoke in Palestine’:

“Bernard Lewis has noted that the word “Palestine” was sometimes used by Greek and Latin authors prior to 135 CE, though that appears to have normally been used as an adjective in apposition to “Syria” (Palaistine Syria or Syria Palestina) and in reference to the coastal area formerly inhabited by the Philistines but not “Judaea,” a region that “in Roman times was still officially and commonly known by that name,” as Lewis explained, or the region around Nazareth (“Palestine: On the History and Geography of a Name,” The International History Review, January 1, 1980).”

Earlier this year when the same paper referred to “first-century Palestine” CAMERA noted that:

In 132 (Common Era or AD), approximately 100 years after the crucifixion of Jesus, the Jews fought against Roman rule for a second time in what is known as the Bar Kochba Revolt. After the Romans defeated the rebellious Jews in 135, they renamed the land of the Jews Palestina to punish the Jews and to make an example of them to other peoples considering rebellion. The Romans took away the Jewish name, Judea, and replaced it with the name of an ancient enemy the Jews despised. The Philistines were an extinct Aegean people whom the Jews had historically loathed as uncultured and barbaric.”

One must assume that it is not a lack of knowledge which prompted “one of the UK’s prominent black theologians” – as Beckford is described in the programme’s synopsis – to repeatedly promote the anachronistic notion that Jesus was “a first-century Palestinian Jew”. In fact, Beckford’s political/theological agenda is abundantly clear throughout the programme, which begins by describing Jesus as “a leading figure in the fight against racism and discrimination” and goes on (apparently missing out the word ‘to’) to claim that:

“…in reality Jesus was a refugee whose family had to flee North Africa due to persecution. He was one of the oppressed by the colonisers of his day.”

While one can of course agree or disagree with Beckford’s politics and ideas, this programme’s repeated references to Jesus as “a first-century Palestinian Jew” are clearly inaccurate and misleading to audiences. 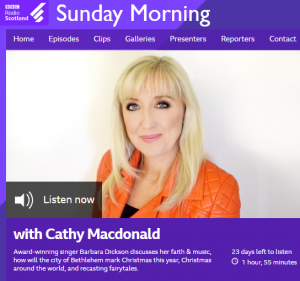 Moreover, prior to its broadcast on BBC World Service radio, that programme was the topic of a discussion on the December 13th edition of BBC Radio Scotland’s ‘Sunday Morning’ (from 46:29 here). Listeners to that item likewise heard Jesus repeatedly described as Palestinian.

“…historically he [Jesus] was a dark-skinned first-century Palestinian.”

“…people can say ‘oh, because he’s Palestinian so he obviously couldn’t be black…”

We will of course be requesting that the BBC correct the inaccurate claims that Jesus was Palestinian and that he lived in a place which was at the time called Palestine aired in both those programmes.