On December 21st an article was presented on the BBC News website’s ‘Africa’ and ‘Middle East’ pages with a reference to “restoring relations” which have never existed.

Titled ‘Sudan-Israel deal fuels migrants’ fears’, the article was written by a freelance journalist based in Khartoum, Zeinab Mohammed Salih. Its opening paragraph includes a link to previous BBC reporting and early signposting of the topic of normalisation of relations between Israel and Sudan as “controversial”. 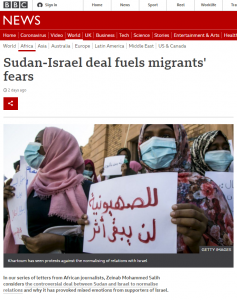 “In our series of letters from African journalists, Zeinab Mohammed Salih considers the controversial deal between Sudan and Israel to normalise relations and why it has provoked mixed emotions from supporters of Israel.”

The main theme of the article is the as yet theoretical possibility that, following a normalisation agreement, Sudanese migrants currently in Israel might be repatriated.

Referring to houses on the outskirts of Khartoum, Salih states:

“In recent decades, some are being rebuilt using steel and cement thanks to the money being sent home from relatives seeking refuge in Israel after making the perilous journey across the Sinai desert where Egyptian border guards patrol. Some die in their attempt.

But the temporary refuge granted to those who make it to Israel may be threatened by the deal – negotiated by US President Donald Trump’s administration – to normalise relations between Israel and Sudan, something most Arab nations said would happen only after the Palestinian dispute was settled.

Cohen’s remarks were in fact made in August – two months before it was announced that Sudan had agreed to normalisation of relations with Israel.

“Yet most of them come from places still facing conflict in Sudan.

According to the UN, there are more than 6,000 Sudanese migrants in Israel and the vast majority have not been granted official refugee status.”

The BBC’s article does not explain what “most of them” means in numerical terms. As the Jerusalem Post reported in October:

“Sudanese nationals could not be deported previously, due to humanitarian conditions and because Israel did not have diplomatic ties with Sudan. Thousands of Sudanese migrants entered Israel in the past 15 years, and about 6,200 remain.

The Hotline for Refugees and Migrants, the leading Israeli NGO on African migrants’ issues, says that around 4,400 of them are from the Darfur, Nuba Mountains and the Blue Nile regions, where there are continuing conflicts; about 2,000 migrants from those regions were granted “humanitarian status” by the Interior Ministry.”

Interestingly, at no point in this article are readers informed that Sudanese migrants in Israel entered the country illegally. The article uses the terms asylum seekers, migrants and refugee interchangeably with no attempt made to distinguish between those different statuses.

Readers are not informed that – as Salih herself reported at the Guardian this month – other countries including the Netherlands and the UK are reassessing “asylum claims of […] Sudanese people from Darfur, South Kordofan and Blue Nile who have temporary residents’ permits or who were granted residency on the basis of safety”. Neither does the article make any mention of the fact that the UN refugee agency has repatriated refugees to Darfur in recent years.

Instead, this article promotes the speculative claim that Sudanese migrants would be put at risk by repatriation because of the very fact that they had been in Israel.

“Azra el-Nour, who lives in the Israeli town of Arad, agrees she is unwilling to be sent to Sudan. She fled the war in the Nuba Mountains with her family when she was seven years old.

They went to Egypt, where they spent seven years as refugees without any offer of resettlement to a third country.

“So my father decided that we should go to Israel, and it wasn’t easy we went through a lot to get here,” she told me.

She is now 27 and a mother of two children who only speak Hebrew – none of them have been granted official refugee status.

She is concerned that if they were forced to go back to Sudan for any reason they might face discrimination for living in a country that has long been portrayed in the Sudanese collective imagination as an enemy. […]

Thirty-one-year-old Bashir Babikir says he fears being returned to Darfur, where his family still lives in a camp after their village near Kotum was attacked. […]

He then left for Israel via Egypt paying Bedouin smugglers – and he is scared of returning given some Sudanese attitudes to Israel. […]

“If we were sent back to Darfur, we might die, Israel is still an enemy for many people, but also here we are living in terrible conditions,” admits Mr Babikir.” [emphasis added]

Towards the end of the article readers were originally told that:

“…the situation is complex for the Sudanese in Israel, who do not feel welcome. Israel says any decision to go home is voluntary – but the migrants face various moves to force them to leave.

For example, the UN says new laws require employers to withhold 20% of net salaries until their departure from Israel.”

CAMERA UK submitted a complaint to the BBC pointing out that the claim had clearly not been properly researched . The Deposit Law is not “new” as Salih stated: it was passed in May 2017. Moreover, the relevant part of it was struck down by the High Court in April 2020:

“The High Court struck down the collection of 20% of migrant employees’ salaries by the state, while upholding the state’s collection of an additional part of the salary paid by employers, which made up 16% of the deposit.

Regarding the 20%, any previously collected funds must be immediately returned to migrants, the court ruled.”

The BBC responded to our complaint as follows:

“Your complaint is correct and we have since amended the article to now say:
For example, in 2017 a law was passed requiring employers to withhold 20% of net salaries until their departure from Israel – legislation which the High Court ruled was unconstitutional in April.
We have also added a correction note at the bottom of the article advising readers of the change.”
That correction note reads:

BBC coverage of the topic of African migrants in Israel has long lacked accuracy, impartiality and consistency. This latest article adds to that record.