Nine months ago the BBC began telling its audiences that the ruling Hamas authority’s ability to deal with the Coronavirus pandemic in the Gaza Strip is compromised by a shortage of medical supplies, high population density and poverty. That messaging has been repeated numerous times since then across all BBC platforms, including in an interview with a senior official at the Hamas-run ministry of health aired in September.

Al-Haj: “You know the health services in Gaza, the healthcare system, which depends mainly on the governmental ministry of health facilities because of the health insurance that is almost free due to the very bad social economical situation in Gaza, so people are relying on the government, more than 96% of them. I know that we have a big problem in our resources either for the human resources – not receiving the salaries – or with the resources of medication that are more than 47% of the medications are zero stock in Gaza since a month and also more than 28% of our consumable medical supplies are also zero stock besides the laboratory material which is also 61% of them are zero.”

Neither in that nor any other BBC report throughout the past nine months did audiences hear about the issue of Hamas’ budgetary priorities which place terrorism over healthcare and other services. While report after report told audiences of a shortage of ventilators and medical supplies, the discovery in October of a cross-border attack tunnel costing millions of dollars was ignored by the BBC. 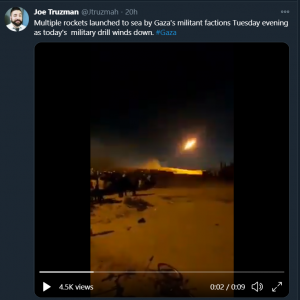 The corporation has likewise turned a blind eye to the highly-publicised military drill held (despite the high number of cases of Covid-19) on December 29th in the Gaza Strip. Organised by the ‘Joint Operations Room’ which comprises Hamas, the Palestinian Islamic Jihad, the PFLP, Fatah and additional terror factions, the drill included the firing of rockets into the sea, which was closed to fishing.

“According to the groups, the drill aims to send a “message of deterrence” to Israel. “The main message is that the Palestinian resistance groups are ready to respond to any Israeli aggression,” a Hamas official in the Gaza Strip told reporters.

Abu Mujahed, a spokesman for the Popular Resistance Committees, one of the groups scheduled to participate in the drill, said it would “carry new surprises and messages to the Zionist enemy.”

The Palestinians will see how the performance of the “resistance groups has developed their capabilities,” he said.”

While there is no indication of the cost of that venture, Hamas spending on military activities was reported in 2016 to be around $100 million a year and in 2018 the terror organisation was estimated to have already spent around $150 million on tunnel building.

Remarkably, the BBC’s repeated portrayals of the ability of the Gaza Strip to cope with the Coronavirus pandemic have at no point in the past nine months included any information concerning the ruling faction’s budgetary preference of military activities over healthcare, social welfare and infrastructure – thereby whitewashing the issue of its agency and responsibility.