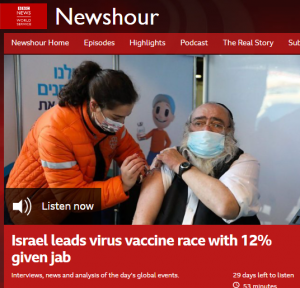 The evening edition of the BBC World Service radio programme ‘Newshour’ on the same day had the same story as its lead item (from 00:10 here).

“Israel has given vaccinations against coronavirus to more than one million people, the highest rate in the world, as global immunisation efforts step up.”

However presenter Lyse Doucet was clearly not solely interested in helping her listeners understand how Israel has managed to achieve such high levels of vaccination compared to other countries.

Doucet: “Around the world in growing number of countries the race is on between the rate of injections and infections. The number of Covid-19 cases continues to rise and, in some countries, faster than ever. But vaccination campaigns are rolling out too, and at much different speeds. A global tracking website at Oxford University says the United Kingdom, which was the first country to start inoculating its citizens with the Pfizer-BioNTech vaccine, is now administering 1.47 doses per 100 people. Bahrain in the Gulf in contrast is at 3.49 doses but Israel is quite a bit faster at nearly 12 doses: a million people in all. In contrast, France has only vaccinated a few hundred people. […] but first to Israel’s success: a country which had been having great difficulty keeping the virus under control. Dr Ronni Gamzu is one of Israel’s leading public health experts. He was the country’s Covid czar until November.”

Professor Gamzu gave an outline of the structure of Israel’s healthcare system, spoke about the public relations campaign to encourage vaccination and clarified that whilst infection has been high in Israel, morbidity has been relatively low.

Citing “criticism” from sources she chose not to identify, Doucet however shifted the topic from health to politics in the second half of that nearly six-minute interview (from 03:33), despite the fact that her sole interviewee is an expert in obstetrics and gynecology and medical management rather than ‘international law’.

Doucet: “There’s been some criticism though about the…whether vaccines are being given to Palestinians. I know there’s a difference because there’s the Arab Israelis who are Israeli citizens and then there are Palestinians living in areas which legally Israel controls them.”

Gamzu: “Israel controls them on a limited way. We do not run the health system there. All the civilian activities are being run by the Palestinian Authority in the Gaza strip as well as in the West Bank. So we are not really involved but, but I must say that we do our best and we coordinate a lot of operations.”

Doucet: “But under international rules of occupied territories, the areas which Israel controls which are in the international law regarded as occupied, Israel has the responsibility to take care of its residents so that would mean that Israel is also obligated to provide vaccines for many Palestinians.”

Gamzu: “You know what, I believe this is the case and it will be the case. I believe that…”

Doucet [interrupts]: “Is it the case now?”

Gamzu: “No it’s not the case now because, you know, we are very early in the operation of vaccination all around the world. But I believe Israel should take the lead with coordination with the Palestinian Authority and put their efforts to get vaccines for the Palestinian territories because really we have a role there. But I must say this must also come both ways. They have to be in the position that they really will ask for that and really will want that. There are 100,000 Palestinians who are coming every day to work in Israel and we have a rule that they will be given tests – Corona tests – as others. And I believe that this is the same thing. Any Palestinian that is coming to work in Israel must be given vaccination according to indication here in Israel. Any leader in Israel should do his best to protect any human being that is around us and we have some kind of responsibility for them to hand over vaccines whenever it’s necessary and possible.”

It is hence the PA health ministry which is responsible for vaccinating Palestinians and indeed that body has run successful vaccination programmes against various infectious diseases including polio and diphtheria for a quarter of a century.

Neither were listeners informed that the Palestinian Authority has to date not requested Israel’s help on the topic of Coronavirus vaccines.

“A senior official with the Palestinian Authority Ministry of Health said that the Palestinians do not expect Israel to sell them, or purchase on their behalf, the vaccine from any country.

The official told The Jerusalem Post that the Palestinians will soon receive nearly four million Russian-made vaccines against COVID-19. […]

Another PA Ministry of Health official said that he expected vaccinations in the West Bank and Gaza Strip to begin next month. He, too, clarified that the PA has not asked Israel to supply the Palestinians with the vaccine. “We are working on our own to obtain the vaccine from a number of sources,” the official added. “We are not a department in the Israeli Defense Ministry. We have our own government and Ministry of Health, and they are making huge efforts to get the vaccine.””

Like some other Western journalists (see examples in ‘related articles’ below), Lyse Doucet apparently does not believe that the Palestinian Authority has the ability or agency to look after the health of its citizens. She also apparently decided to exploit the opportunity to promote a typically partial interpretation of ‘international law’ in order to uncritically advance a political narrative identical to that currently being promoted by a selection of political NGOs.

Clearly her attempts to steer a professor of medicine who no longer holds a government position to answer the spurious claim that “Israel is obligated” to provide vaccinations for Palestinians resulted in BBC audiences worldwide being left with inaccurate and misleading impressions.