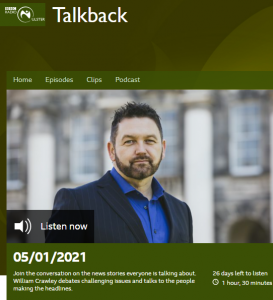 Some five minutes into that item (from 1:15:16 here), the conversation digressed.

Crawley: “And David, on the vaccine roll-out, let me just ask about something you and I were talking about the other day – Israel. What is it? One third of their population now vaccinated?”

Crawley: “Six million in their population. How do you explain why they’re doing so well on that?”

The population of Israel was in fact nearly 9.3 million at the end of 2020 and as of January 5th some 16% of the population – rather than “one third” as claimed by Crawley and affirmed by McCann – had received their first vaccination against Covid-19.

McCann: “Well it’s interesting. I was actually looking…the Israeli government has just collapsed, ironically. They’re heading back to the polls. They’ve got a multi-party coalition, they had a government…”

O’Connor: “And they’re not vaccinating Palestinians. I think that’s some of it [unintelligible] it isn’t very good.”

Mc Cann: “I think it’s more about…ehm…I think it’s just more about the infrastructure. I mean the governmental infrastructure in Israel from what I understand of it does tend to be very strong and it does tend to be very…ehm…very functional. So, you know, Israel’s another country with multi-party coalitions and they seemingly are able to do this and again…”

Crawley [interrupts]: “What about that point Fionnuala just made? They’re not vaccinating Palestinians. It’s a fake number.”

Mc Cann: “Oh absolutely. Look…and that…look, another complete own goal by the Israeli government, you know, in terms of something…”

O’Connor: “But not in terms of their support, David. I mean they’re playing to their own gallery.”

Crawley failed to clarify who exactly O’Connor meant by “Palestinians” but hopefully the intention was not the Palestinian residents of Jerusalem who are being vaccinated because they have healthcare insurance with one of Israel’s four providers.

As has been the case in previous BBC reporting on Corona vaccinations, the participants in this conversation appear to object to the fact that Israel is not providing injections to Palestinians living in the Gaza Strip or Judea & Samaria who do not pay the taxes used to purchase the vaccines that Israel has secured.

Once again no effort was made to clarify to listeners that under the terms of the 1995 Oslo Accords, the Palestinian Authority is responsible for providing healthcare – including vaccinations – in those areas. And yet again BBC audiences were not informed that the PA has not requested Israel’s help on the issue of procuring vaccines.

In short, listeners to BBC Radio Ulster were given an inaccurate account of Israel’s population and an inaccurate account of the proportion of Israelis vaccinated so far. They were also wrongly told that the proportion of people vaccinated is “a fake number” because it does not include “Palestinians” who are not Israeli citizens and whose healthcare is not Israel’s responsibility and encouraged to believe a spurious allegation of political motivations.

So much for the BBC’s supposed commitment to accurate and impartial journalism.