On Sunday, the Guardian (via their sister site, the Observer) published an article on a King’s College/YouGov poll – commissioned by Campaign Against Antisemitism – on the attitudes of British Jews, which found that “90% believe that media bias against Israel fuels persecution of Jews in Britain”. 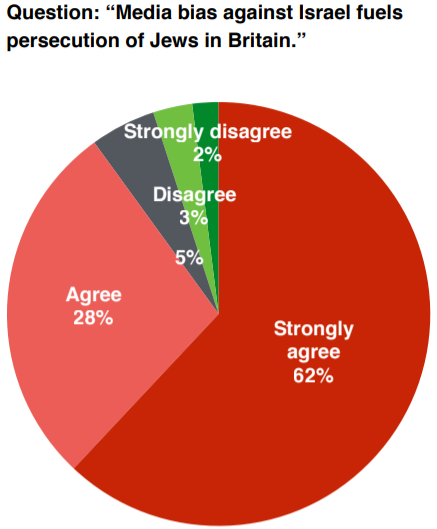 On that same day, the Guardian published an official editorial on the recent B’Tselem report they’ve been promoting which not only accused Israel of apartheid, but characterised it as a “Jewish supremacist” state. Though their coverage up until today uncritically quoted B’Tselem’s “Jewish supremacism” charge, and included an op-ed by the NGO’s director which used that term, this editorial used that term in their own editorial voice:

Israel has a problem of historic discrimination. But under Benjamin Netanyahu’s government there has been the enactment of the nation state law that constitutionally enshrines Jewish supremacy and a plan to formally annex parts of the West Bank.

First, let’s be clear. This has nothing whatsoever to do with Israel’s prime minister, or even the nation state law.  Though we’ve refuted Guardian charges that the law enshrines discrimination, our concern is with their editors’ use of a term which suggests the state is intrinsically racist, and which has a clear antisemitic history.

Anti-Semites often use the term to suggest Jews believe themselves to be racially or ethnically superior to non-Jews – and therefore must dominate them, and, as we demonsrated previously, the idea of “Jewish supremacism” is often associated with neo-Nazi David Duke.  Duke wrote a book using that very term in the title, and published a “Ph.D.” dissertation titled “Zionism as a Form of Ethnic Supremacism”.

“Israel”, he writes on page 208, “lives as a testimony to the…supremacist nature of…Zionism”.

The term “Jewish supremacism” is also used frequently in the writings of notorious anti-Semite Gilad Atzmon, and, as Anti-Defamation League documented, the American far-right employ the term in their vilification of George Soros.

We contacted Community Security Trust (CST), who provided us with the following statement about the use of the term by the Guardian and B’Tselem:

“The meaning and impact of language can vary considerably depending on who is using it, the audience that is hearing or reading it, and the context in which it lands. For this reason, whatever B’Tselem’s intended meaning in Israel regarding the phrase “Jewish supremacy”, they ought to have been cognisant that this phrase has a long-standing antisemitic usage outside Israel, and journalists in the UK, writing for primarily non-Jewish audiences, should be even more mindful of the danger of such wording.”

The danger British Jews feel about such wording, per the CAA poll which the Guardian reported on, is that it demonises not only Israeli specifically, and Zionism more broadly in a manner that’s arguably antisemitic per the IHRA definition, but vilifies Jews qua Jews – insofar as most are (correctly) identified as Zionists.

We’ve complained to the Guardian, and asked that they remove that antisemitic term from their editorial.