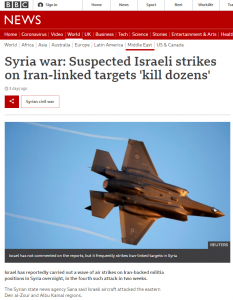 One notable aspect of that report is its presentation of the context to the story: after nearly a decade of conflict in Syria, the BBC is still unwilling to provide audiences with factual information about Iran’s build-up of forces – including proxy militias – in that country in its own words.

“Israel has accused its enemy [Iran] of building up a force inside Syria and using the country to smuggle advanced weapons to Lebanon’s Hezbollah movement.

Iran is believed to have deployed hundreds of troops to Syria and to have armed, trained and financed thousands of Shia Muslim militiamen – from Lebanon, Iraq, Afghanistan and Yemen – to support forces loyal to President Bashar al-Assad in the nine-year Syrian civil war.” [emphasis added]

The BBC’s account of what happened in those “suspected Israeli strikes” relies primarily – as usual – on a source based in the UK.

The Syrian Observatory for Human Rights, which monitors the conflict in Syria through a network of sources on the ground, reported that 18 Israeli strikes had targeted military storage facilities and a base on the outskirts of Deir al-Zour, military installations in Albu Kamal, and warehouses outside Mayadin.

At least 57 people were killed, including 14 Syrian soldiers, 16 Iraqi fighters and 11 Afghans, and many others were wounded, the group said.

Forces linked to Hezbollah and the Fatemiyoun Brigade, an Afghan Shia militia, operated in the areas that were attacked, it added.”

The commander of the Fatemiyoun Brigade later denied that any of his men had been killed.

In addition the BBC’s report quotes a former Free Syrian Army spokesman now based in Europe and a second hand statement from an “unnamed” source in the US.

“Omar Abu Layla, the Europe-based head of the activist DeirEzzor24 news website, tweeted that the warehouses had contained a shipment of missiles and other weapons brought to the Deir al-Zour area by the Fatemiyoun Brigade in recent weeks for distribution among Iran-backed militias.”

“An unnamed senior US intelligence official told the Associated Press that the air strikes had been carried out with intelligence provided by the US and that they had targeted warehouses being used as part of a pipeline to store and stage Iranian weapons.”

Clearly none of those statements and claims had been independently verified by the BBC before publication.

Another notable point concerns the BBC’s unqualified amplification of reports from Iranian and Syrian state media, with no effort made to clarify the reliability of such sources.

“Iran’s state-run Arabic TV channel, Al-Alam, quoted a source as saying “no Iranians, Syrians, or members of the Fatemiyoun Brigade were martyred”.”

Sana reported that Israel had carried out “air aggression” around the city of Deir al-Zour and the town of Albu Kamal, which is near the Iraqi border, at 01:10 on Wednesday (23:10 GMT on Tuesday).

It said the damage was still being assessed and accused Israel of “directly interfering to support terrorist organisations”, particularly the jihadist group Islamic State (IS), which is active in the area.” [emphasis added]

That highlighted statement from Sana is obviously nothing more than Syrian propaganda but the BBC chose to promote it nevertheless. Anyone who has followed the BBC’s coverage of the topic of strikes attributed – rightly or not – to Israel in recent years would not be surprised by that editorial decision because the BBC has repeatedly chosen to amplify the Assad regime’s claims concerning alleged Israeli backing for ‘terrorists’ since 2013:

As we have noted in the past, the BBC supposedly distinguishes itself from ideologically motivated, regime-run media by providing audiences with accurate and impartial reporting which will enable audiences to understand what is fact and what is fiction. Uncritical amplification of Syrian regime propaganda is clearly not conducive to achieving that goal and one would of course expect a serious media outlet (especially one which promotes itself as an authority on ‘fake news’) to be considerably more cautious about promoting unverified statements in supposedly factual news reports.