The January 16th edition of ‘Dateline London’ – aired on the BBC News channel and the BBC World News channel – included a discussion (from 10:32 here) concerning Israel’s vaccination programme against Covid-19 and its potential effect on the upcoming election.

After the first part of the discussion, presenter Shaun Ley asked guest journalist Jonathan Sacerdoti the following question: [emphasis in italics in the original, emphasis in bold added]

Ley [13:42]: “What about the Palestinians? Because healthcare is delegated to the PA and – to the Palestinian Authority – as far as the West Bank and Gaza but the Oslo Accords are very clear that in a crisis healthcare is ultimately the responsibility of the Israeli government.”

The part of the 1995 Oslo II agreement relating to health (Article 17) says nothing of the kind and healthcare for Palestinians is not “delegated” to the PA: the first clause of that article clearly states that “Powers and responsibilities in the sphere of Health in the West Bank and the Gaza Strip will be transferred to the Palestinian side, including the health insurance system”. 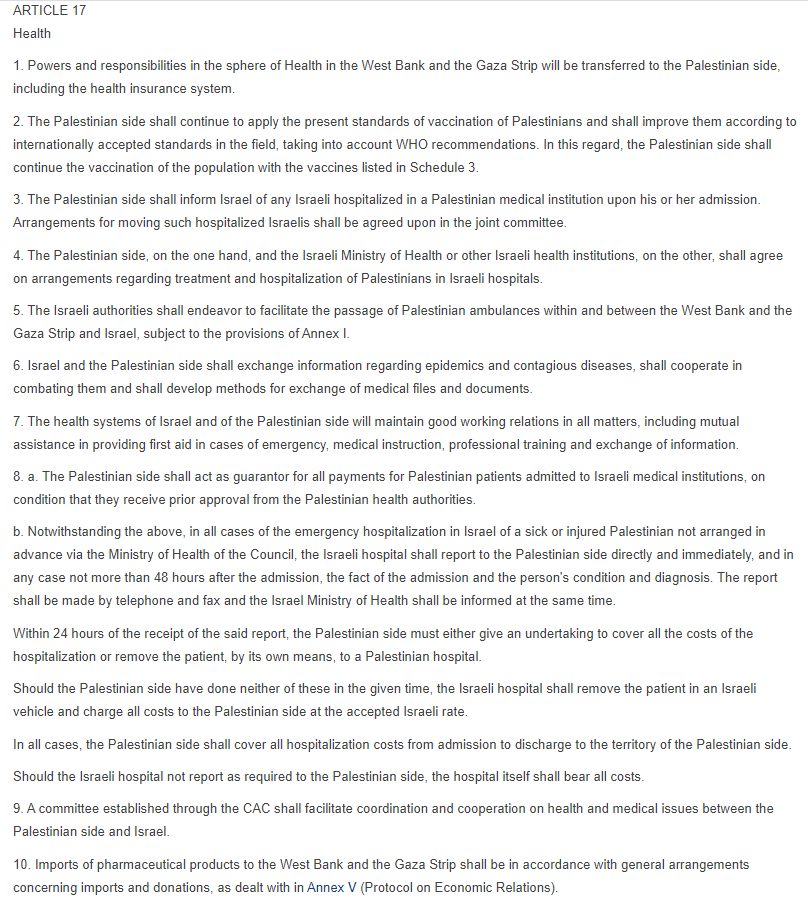 Ley [15:05]: “I’m not going to get into a dispute over what the Oslo Accords said. I notice the Spectator magazine quoted them as saying it [Israel] is required to step in as and when it’s needed and I guess a global pandemic might be regarded as the ultimate need and there is the old thing about it’s in all of our interests for everybody to be vaccinated.”

The Spectator article upon which Ley based his claims appears to be this one by Anglo-Israeli journalist Anshel Pfeffer, published on the same day, which provides a clue as to where Ley got the inaccurate term “delegated”.

In other words, Ley merely recycled the debatable claims appearing in one paragraph of Pfeffer’s article – obviously without doing any fact checking for himself in order to conform whether or not the Oslo Accords actually say what Pfeffer claims they say or whether or not the writer’s interpretations of ‘international law’ and the Fourth Geneva Convention actually hold water.

Under the terms of its public purposes the BBC is obliged to provide “duly accurate and impartial news, current affairs and factual programming” adhering to “the highest editorial standards” together with “a range and depth of analysis and content not widely available from other United Kingdom news providers”.

Recycling unsubstantiated claims found in an article published by a different media outlet obviously does not meet those standards and obligations.