The lead item in the evening edition of the BBC World Service radio programme ‘Newshour’ on January 24th was described as follows in its synopsis: 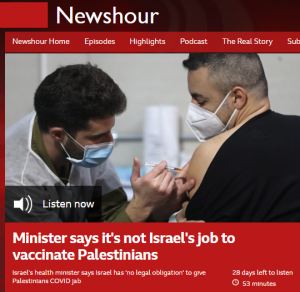 “Israeli Health Minister Yuli Edelstein has rebuffed calls from the United Nations to provide COVID-19 vaccinations to the Palestinians. He said Israel was not under any legal obligation to vaccinate Palestinians in the occupied West Bank and the Gaza Strip. Omar Shakir from Human Rights Watch tells us why he disagrees.”

Presenter James Menendez introduced the item (from 00:11 here): [emphasis in italics in the original, emphasis in bold added]

Menendez: “And we’re going to start today in the Middle East and the argument over whether Israel is doing enough to ensure Palestinians living in the West Bank and Gaza have access to Coronavirus vaccines. Last week two UN human rights experts called on Israel to provide – quote – swift and equitable access to the jabs.”

Menendez failed to name the two “experts” – both UN special rapporteurs for the notoriously anti-Israel UN Human Rights Council – Tlaleng Mofokeng and Michael Lynk. As the UN’s own material clarifies:

As had already been the case in two previous BBC reports, Menendez made no effort to inform listeners of the obviously relevant anti-Israel record of one of the authors of that ‘call’ before continuing:

Menendez: “Israel is leading the world when it comes to the pace of its vaccination programme. The Palestinians have ordered a supply of injections but these aren’t expected to arrive for weeks. Well today the Israeli health minister Yuli Edelstein told the BBC that Israel wasn’t legally obliged to provide the vaccines for Palestinians. Here he is talking to the BBC’s Andrew Marr.”

Listeners then heard a recording of the interview previously discussed here:

At 02:59 Menendez brought in his sole interviewee – Omar Shakir of ‘Human Rights Watch’ – but in breach of BBC editorial guidelines on impartiality he failed to provide listeners with any information concerning that political NGO’s “affiliations, funding and particular viewpoints” and Shakir’s own record as a supporter of the anti-Israel BDS campaign.

Menendez: “Well Omar Shakir is Israel and Palestine director for Human Rights Watch. Does the Israeli health minister have a point when he says Israel doesn’t have to provide vaccines to the Palestinians?”

Shakir: “Yuli Epstein [sic] is absolutely wrong on the law. International humanitarian law is quite clear that Israel, as the occupying power, is responsible to ensure medical supplies, including those needed to combat pandemics, to the occupied population. Israel remains the occupying power in the West Bank and Gaza Strip and in fact after more than five decades of maintaining near full control over millions of Palestinians, they’ve had more time and [unintelligible] to assume responsibility for the provision of these rights. International human rights law makes quite clear that the non-discrimination and provision of the right to health should underlie Israeli policy towards Palestinians. The Oslo Accords do not erase Israel’s duty as an occupying power.”

Failing to question the claim that Israel has “near full control” over territories from which terror attacks are frequently launched against its own citizens, Menedez gave Shakir his next cue.

Menendez: “I guess there will be Israeli politicians who say they’re not occupying those areas.”

Shakir: “Look the reality is Israel maintains control over the movement of people and goods, control over the border. It controls primarily security. It controls taxation collection. It’s convenient for Israel that while it maintains all these leverages and control, side-lining the Palestinian Authority, it can’t just suddenly assign sole responsibility to the Palestinian Authority when it wants to offload its own responsibilities for the health of people under occupation.”

Menendez made no effort to point out that the Gaza Strip also has a border with Egypt or that the collection of specific taxes by Israel on behalf of the PA is in accord with agreements signed by the Palestinians. Neither did he bother to ask Shakir why, if the legal situation is as he claims, his organisation and like-minded others have not demanded that Israel supply vaccines against other illnesses throughout the past quarter century since the Oslo Accords were signed.

Menendez: “Nevertheless, I mean he is right to say that the Palestinian Authority does need to look after its citizens and look after the health of its citizens. I mean, that’s fair isn’t it?”

Shakir: “Absolutely. Palestinian authorities do have that duty but that does not absolve Israel of its obligations. The reality here is both authorities should cooperate together to ensure that everyone receives vaccines without discrimination.”

The BBC of course knows full well that it is the responsibility of the Palestinian Authority to provide healthcare to the Gaza Strip but nevertheless Menendez provided Shakir with another cue for his baseless ‘occupation’ talking points:

Menendez: “I was talking about the Palestinian Authority; of course they govern the West Bank. But what about Gaza? Is that different because there’s no Israeli presence in Gaza? Is it up to Hamas solely to provide the vaccine there?”

Shakir: “Absolutely not. The United Nations, the Red Cross, Human Rights Watch, many…ah…states consider Israel to retain the duties of an occupying power in Gaza by virtue of its control over air space, water space, border movement of peoples and goods. So it retains responsibility. That doesn’t mean that Israel has to go in and vaccinate but it does mean that it must provide vaccines, whether it be through international humanitarian organisations, whether it be providing those to the Palestinian Authority. But its obligations remain in place by virtue of its control over many aspects of everyday life.”

Menendez: “Time, of course, is pressing as regards vaccination. How can the Palestinians ensure that they get access to the vaccines they need? I mean they can’t really pursue a legal case on the basis of all that you’ve outlined. I mean that would just take far too long, wouldn’t it?”

Shakir: “Absolutely. Look I think it’s incumbent on the international community to place pressure on Israel to live up to its responsibilities under the law of occupation. The reality is Israel’s vaccinated 3.5 million of its own citizens – 40% of its population – including Israeli settlers in the West Bank but continues to leave 4.5 million Palestinians out in the cold.”

By January 24th – the day this programme was aired – Israel had in fact vaccinated 2.6 million people (28.19%) with the first dose – not 3.5 million and 40% as inaccurately claimed by Shakir. 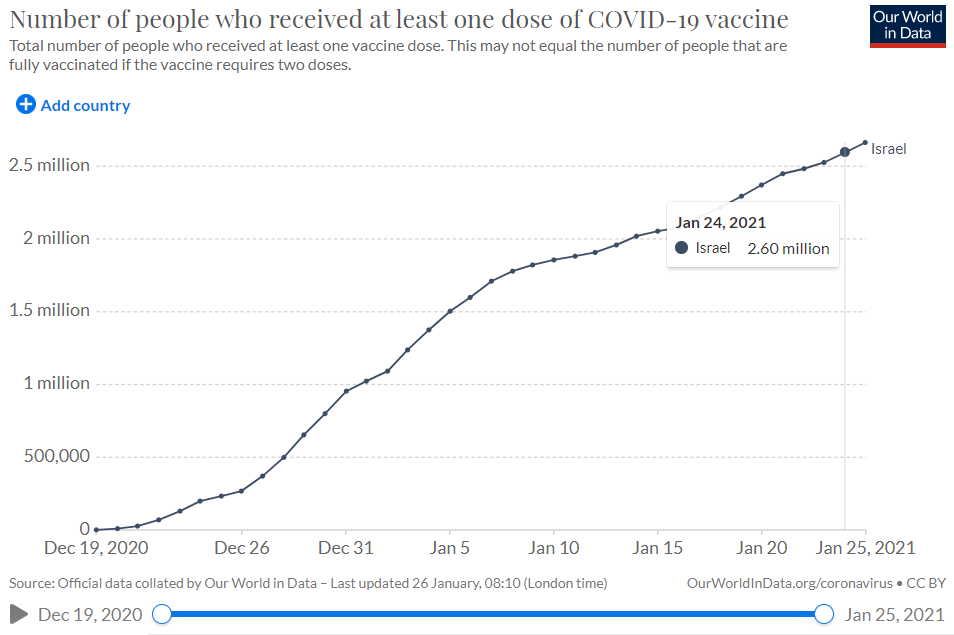 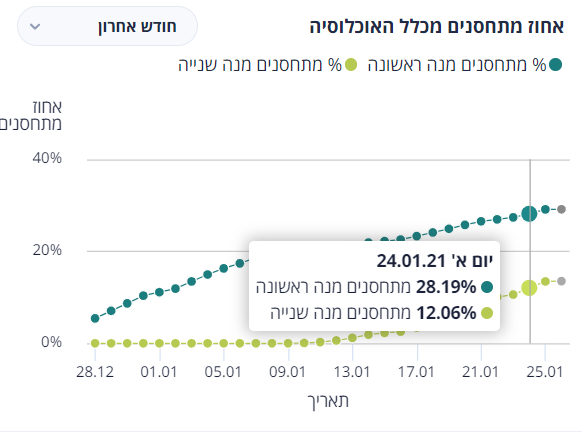 Menendez: “Have the Palestinian Authority – and indeed Hamas – have they bought a substantial quantity of vaccines yet?”

Menendez: “And how pressing is the need? Are cases rising?”

Listeners were not given any information which would enable them to put Shakir’s claim of 8,500 active cases among a population of 4.5 million into perspective and hence make up their own minds with regard to “how pressing” the situation is. On the day of broadcast, Israel – with a population of 9.2 million – had 69,973 active cases. Neither were listeners told that while, according to the Palestinian Central Bureau of Statistics, population density in the Gaza Strip was 5,453 persons/km2 in mid 2019, the population density in Bnei Brak – one of the locations in Israel most seriously affected by Covid 19 – was 26,368 persons/km2 at the end of 2017.

Menendez closed the item with another laconic and inadequate presentation of his interviewee.

Clearly the aim of this item was nothing more than to provide a platform for a representative of one of the BBC’s most quoted and promoted political NGOs to advance his talking points concerning the political campaign it joined earlier in the month. Listeners heard no alternative views to Shakir’s partisan interpretations of Israel’s supposed obligations under ‘international law’ and his many inaccurate claims went unquestioned and unchallenged. 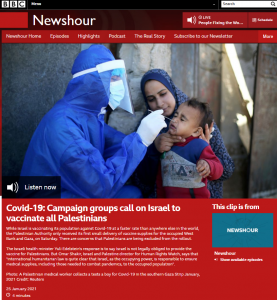 Nevertheless, the following day the BBC chose to separately promote a clip of Shakir’s talking points on social media, further indicating that this item joins the numerous others which are evidence of the corporation’s self-conscription to one-sided promotion of a blatantly political campaign.