Most of the debate concerning Israel’s extraordinarily effective COVID vaccine roll-out has centered around complaints – largely by anti-Israel NGOs, and amplified by the media outlets – that Israel wasn’t ‘sharing’ its stock of the vaccine to Palestinian in the West Bank and Gaza.

Despite the fact that the PA has their own Health Ministry, and has been carrying out their Oslo-mandated responsibility to provide health services, including vaccines, to their population for decades, some have argued, unpersuasively in our view, that, Article 56 of the 4th Geneva Convention nonetheless requires Jerusalem to vaccinate millions of Palestinians who aren’t citizens of the state, even, presumably, at the expense of Israeli citizens.

Though we’ve commented on this row repeatedly, particularly in response to the Guardian and BBC’s amplification of the accusation, this specific debate is now part of a larger narrative being pushed by media outlets.  Many outlets, including BBC and the Guardian, and international bodies like WHO and the UN, have argued that unequal access to the COVID vaccine is a global problem, which they’ve framed as the “threat” posed by “vaccine nationalism”. 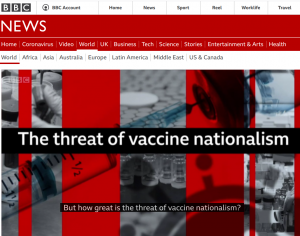 The BBC has defined “vaccine nationalism” as a country prioritising its own citizens’ access to a vaccine above access to other countries’ citizens.  As the BBC presenter implicitly acknowledged, this includes every country in the world, as a government’s priortisation of its own citizens’ needs over citizens of other countries is one of the fundamental expectations of nationhood.

This isn’t to say that wealthier countries shouldn’t contribute aid to international efforts to fund vaccines for poorer countries, as many have already done by donating funds to the World Health Organisation’s COVAX program, or that governments shouldn’t donate any surplus vaccines to other countries. President Biden recently announced that, once there is sufficient supply in the United States, the US will be donating vaccines to countries in need.

The point is that the expectation that these governments should divert vaccines, purchased of course for their own citizens, to foreign citizens is not a sober-minded policy consideration, but an idea born of platitudes about universal brotherhood that most would likely find emotionally evocative whilst simultaneously rejecting its real world implications.

Far from representing something atavistic or sinister, what media outlets are pejoratively referring to as “vaccine nationalism” is, in reality, merely the rational expectation of citizens – especially those living in democratically-elected governments – that political leaders will fulfill one of their most basic duties: to promote the general health and welfare of their country.