On the afternoon of January 29th a report headlined “Delhi blast: Small bomb detonates near Israeli embassy in Indian capital” and tagged ‘India’ appeared in the ‘updates’ section of the BBC News website’s ‘Asia’ page.

As of January 31st the same short article also appeared on the website’s ‘Middle East’ page.

The report gives an initial account of the incident itself which has not been updated to include later developments such as the discovery of a letter. 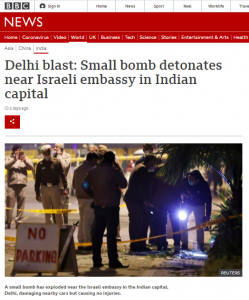 “Indian media reports said investigators had found an envelope with a letter addressed to the Israeli ambassador in the street describing the low-intensity explosion as a “trailer” and making references to “Iranian martyrs” Qassem Soleimani and Mohsen Fakhrizadeh. “We can end your life, anytime, anywhere,” the letter read.”

“An Israeli diplomat’s wife was wounded when a bomb was planted under her car in New Delhi nine years ago.

On the same day, 13 February 2012, a bomb was also planted under an Israeli diplomatic car in the Georgian capital Tbilisi but it failed to detonate.

Israeli Prime Minister Benjamin Netanyahu accused Iran of being behind both the incidents in 2012 – allegations denied by Tehran.

Who was behind 2012 Israel embassy attacks?”

Not for the first time (see ‘related articles’ below) the BBC erases from audience view the fact that the investigation into the 2012 attack in New Delhi resulted in India’s police concluding that the Iranian Revolutionary Guards were behind the attack. The BBC also omits any mention of the related Red Notice put out by Interpol in March 2012 or the findings of additional investigations. 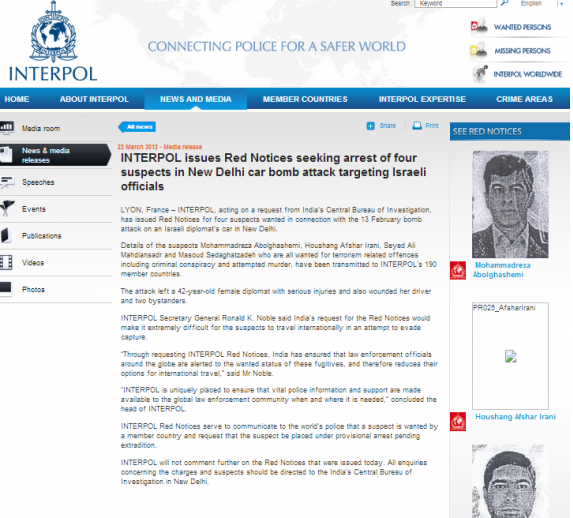 If – as is apparently the case – the BBC considers the February 2012 attack to be relevant background to this latest event at the Israeli embassy in Delhi, it should obviously include the full story rather than what amounts to little more than amplification of Iranian denials of involvement.