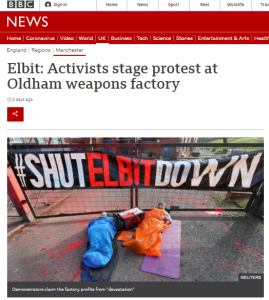 The 232-word report, together with its headline (“Elbit: Activists stage protest at Oldham weapons factory”) and two photo captions, uses the word “activists” four times, the word “demonstrators” once and the word “protester/s” three times while the term “protest” is used four times to describe the event which is its subject matter.

Although the co-organisers of that “protest” boast that they caused £20,000 worth of damage during their 16-hour stunt, interestingly the BBC did not find it appropriate to use the word “vandalism” even once.

The BBC’s portrayal of the aim of the “protest” promotes generalised statements:

“Activists have obstructed the entrance of a factory in a protest against the arms trade. […]

Armed with banners and red paint, they said they oppose “an economy based on devastation, occupation and war”.

One 37-year-old protester, who gave his name only as Paul, said: “We are not here to be a nuisance but we are here to raise awareness.””

Those generalised statements cloud understanding of slightly more specific ones:

“The activists also daubed red paint over the windows and sprayed the words “Shut Elbit Down”.”

“The activists have vowed to escalate their action against Elbit until it is shut down for good.”

The radical group ‘Palestine Action’ (find out more about them here) was however quite clear about its aims in the “notes to editors” it produced:

“Palestine Action is a direct-action network of groups and individuals formed with the mandate of taking direct action against Elbit Systems’ UK locations at grassroots level, calling for them all to be shut down and for the British Government to end its complicity in Israeli apartheid.”

In other words, the group is not interested in protesting “the arms trade” in general as claimed by the BBC.  As its ‘constitution’ clearly states, ‘Palestine Action’ deals exclusively in the delegitimisation of one country alone. [emphasis in the original]

“Palestine Action seeks to bring together individuals and groups to use diverse tactics to end UK complicity in Israeli apartheid and war crimes against the Palestinians. We demand real and dynamic action to end the complicity of organisations that support Israeli colonialism.

We demand all institutions end their links with Israeli apartheid until Israel stops its violations of Palestinian rights by:

We are tired of the UK profiting from the colonisation of Palestine. We are tired of arms companies operating in the same streets that we live in. We are tired of the lack of repercussions for their actions. And this is exactly what we plan to change. Our actions expose, disrupt and destroy the companies which profit off the death and destruction of the Palestinian people and other oppressed groups across the world.

We view the Israeli occupation of Palestine as starting in 1948, and coming out of a history of colonial oppression. The Israeli state is a colonial and apartheid state, and so we view the struggle for Palestinian liberation as an anti-colonial struggle.”

The BBC, however, had nothing to tell its audiences about the antisemitic agenda of ‘Palestine Action’ which negates Israel’s existence. Neither did the corporation provide any explanation to readers as to why a group it has previously profiled as an “environmental campaign group” – ‘Extinction Rebellion’ – partnered the specifically anti-Israel ‘Palestine Action’ in this latest act of vandalism against an Israeli company’s operations in the UK.

And so, just as the BBC has in the past refrained from providing relevant background concerning the aims of the BDS campaign and the agenda of the Palestine Solidarity Campaign (PSC), it once again hinders audience understanding of a story by failing to provide the full range of information about the real agenda of a group whose political stunts it chooses to report.

BBC: IT’S NOT OUR JOB TO TELL AUDIENCES WHAT THE BDS CAMPAIGN IS ABOUT

BBC NEWS REPORT ON PSC AND BDS FAILS TO EXPLAIN EITHER