Visitors to the BBC News website’s ‘Middle East’ page on the afternoon of February 16th were informed that “Israel ‘stops vaccine on way to Gaza Strip’”. 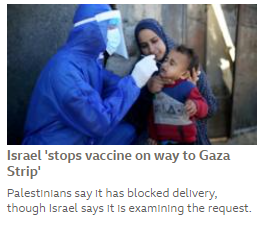 The link took readers to a report by the BBC Jerusalem bureau’s Tom Bateman which first appeared on the same website’s ‘live’ page under the title “Palestinian officials accuse Israel of blocking vaccine supply” and opened:

“Palestinian officials have accused Israel of blocking coronavirus vaccines for health workers in the Gaza Strip, after a batch of 2,000 doses was turned back at a checkpoint in the West Bank. […]

Calling for the transfer to take place, Health Minister Dr. Mai Alkaila accused Israel of breaching international law. An Israeli official said the request had been received but was still being examined.”

The Times of Israel reported:

“The Israeli defense official told The Times of Israel that the Palestinian Authority had sent a truck containing the vaccines to the Beitunia commercial crossing south of Ramallah on Monday. Israeli authorities turned the truck away, the official said.

“They sent a truck full of vaccines down to Beitunia without any kind of coordination with us, without having received the proper permits,” the official said, calling the incident “inane.””

In just one sentence, Bateman managed to turn a terrorist organisation into an “armed movement”, erase Egypt’s blockade of the Gaza Strip and portray the aim of counter-terrorism measures as an ‘Israel says’ issue: 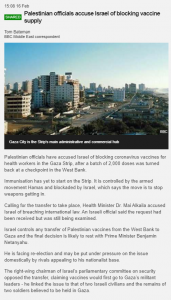 “Immunisation has yet to start on the Strip. It is controlled by the armed movement Hamas and blockaded by Israel, which says the move is to stop weapons getting in.”

He went on to promote speculative linkage between that story and the upcoming Israeli election:

“Israel controls any transfer of Palestinian vaccines from the West Bank to Gaza and the final decision is likely to rest with Prime Minister Benjamin Netanyahu.

He is facing re-election and may be put under pressure on the issue domestically by rivals appealing to his nationalist base.

The right-wing chairman of Israel’s parliamentary committee on security opposed the transfer, claiming vaccines would first go to Gaza’s militant leaders – he linked the issue to that of two Israeli civilians and the remains of two soldiers believed to be held in Gaza.”

According to the ToI, the issue of the captives in Gaza was raised by an MK who is not a member of a “right-wing” party.

“Some Israeli lawmakers have demanded conditioning the transfer of the vaccines on the return of Israeli captives held by Hamas.

The terror group currently imprisons two Israelis — Avera Mengistu and Hisham al-Sayed — and holds the remains of two Israeli soldiers — Hadar Goldin and Oron Shaul. Hamas officials have said they hope to use the four Israelis as bargaining chips in a future prisoner exchange with Israel.

“Israel is going beyond the letter of the law in providing humanitarian aid. We will give humanitarian aid, yes, in exchange for humanitarianism,” outgoing Blue and White MK Michal Cotler-Wunsch told the Knesset Foreign Affairs and Security Committee on Monday.”

Bateman’s use of the phrase “believed to be” conceals the fact that Hamas’ Ismail Haniyeh last year stated that “We have four prisoners…”. Also notable is the fact that in line with BBC practice since 2015, Bateman failed to tell readers the names of those “two Israeli citizens…held in Gaza”.

The morning after Bateman’s report was published the vaccines were transferred to the Gaza Strip. Despite Tom Bateman being aware of that development, the headline “Israel ‘stops vaccine on way to Gaza Strip’” remained on the BBC News website’s Middle East page for some six hours after it was no longer relevant before being replaced by another report by Bateman (also taken from the ‘live’ page) titled “First covid vaccines to enter Gaza strip” [sic]. 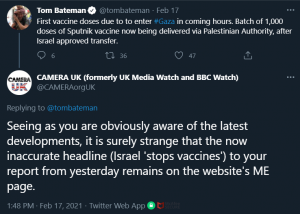 In that item Bateman once again euphemised Hamas as an “armed movement” and promoted false linkage between counter-terrorism measures and the transfer of the vaccines:

“The strip is controlled by the armed movement Hamas, and Israel had so far held up delivery – it says its entry restrictions on Gaza are to stop weapons being developed.”

He closed with yet more promotion of the campaign initiated by a collection of political NGOs which the BBC has been promoting since early January:

“Israel – which has been vaccinating its population at the world’s fastest rate – has transferred 2,000 doses to the West Bank, but it rejects the argument of some human rights group that as the occupying power it should do much more. About 5 million Palestinians so far are still waiting for their vaccines.”

Despite the Hamas health authorities having received those vaccines on February 17th, local media reported that the vaccination drive in the Gaza Strip would only commence on February 22nd. The BBC apparently did not consider that ‘hold up’ to be newsworthy.