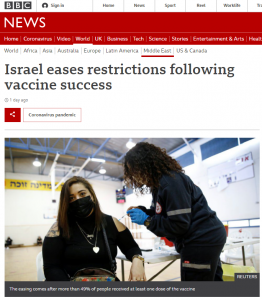 While the report itself is largely accurate and reasonable, it once again promotes the problematic filmed report by Yolande Knell from January 25th.

Towards the end of that report about the vaccination drive and related easing of the lockdown in Israel, the BBC found it necessary to introduce a different topic:

“Earlier this week, the Gaza Strip received its first doses of the vaccine after Israel approved the transfer through its border. The shipment included 2,000 doses of Russia’s Sputnik V vaccine which will be used on patients who have had organ transplants and those with kidney failure, an official told Reuters news agency.

It’s thought about five million Palestinians so far are waiting for their vaccines.”

On the same day as the BBC’s report was published a further 20,000 doses of the Russian vaccine – donated by the UAE – arrived in the Gaza Strip via the Rafah crossing. The vaccination drive there began on February 22nd, five days after the arrival of the 2,000 doses sent by the Palestinian Authority.

Although the Palestinian health ministry did indeed claim – following a meeting in Ramallah with their Israeli counterparts – that it had “struck a deal” whereby Israel would vaccinate Palestinians working in Israel, no such agreement has as yet been approved by the Israeli cabinet, meaning that the BBC’s portrayal is premature.