The characterisation of the Khirbet Humsah as a “community” or “village” is repeated in the first two paragraphs:

The labels read “Humanitarian support to Palestinians at risk of forcible transfer in the West Bank” and they lie in the rubble of a destroyed community that is home to over 60 people, more than half of them children.

The “Irish Aid – Government of Ireland” logos are clearly visible among the debris of broken solar panels, children’s belongings and destroyed tents, marking items donated to the Palestinian families by a European Union umbrella group that includes Ireland among its donors.

As the pandemic raged this winter, the village of Khirbet Humsah was repeatedly razed by Israeli forces in a struggle over territory in a remote part of the Palestinian West Bank that has been under Israeli occupation since 1967.

Over the last three months, nearly 70 structures provided to the community as EU aid have been destroyed or seized, according to the European Commission.

However, as our CAMERA colleagues have previously documented, the description of the Khirbet Humsa encampment – a handful of EU funded tents and pens in Area C, designated by the Olso Accords as under Israeli civilian and military control, and used as an IDF military training ground since 1972 – as a “village” is extraordinarily misleading.

A 2019 aerial photo of the site by the NGO Regavim shows a largely barren land, with two tiny clusters of structures. 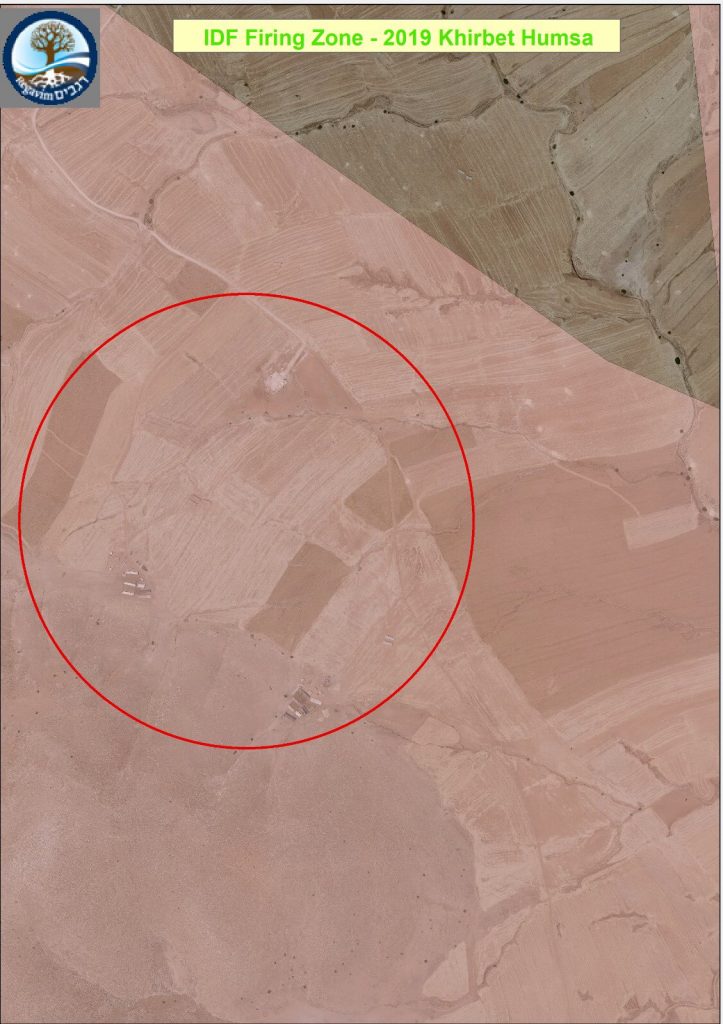 A 2011 Israel’s High Court ruling referred to aerial photographs which the court said showed that the structures on the site appeared to indicate temporary, seasonal residences and not permanent full-time homes, nor anything resembling a permanent “community” or “village”.

This is not a semantic argument. When Irish Times readers see the words “community” and “village”, they’re likely to falsely conclude that Israel ‘destroyed’ a built-up established town where families had lived for generations – rather than simply having removed a squatters’ encampment.

The Irish Times article does quote COGAT stating that their officials “met with Palestinian residents of Khirbat Humsa and explained to them the dangers involved in staying within the firing range as well as offering them alternative space outside of it,” yet no effort is made by the journalist to find out why they turned down Israel’s offer.

Additionally, the piece uncritically cites claims that Israeli confiscation of the encampment ‘violates international law’, without providing a voice to anyone disagreeing with that legal assessment.  Tellingly, the article also completely omits, in an over 1200 word piece, the fact that the complainants had their case heard by Israel’s Supreme Court over the course of nine years, and that the high court ruled that they have no legal claim to that land.

The land in question was declared a firing zone already in 1972. Furthermore, there is no dispute that the appellants do not have recognized property rights in these areas. Essentially, the case involves squatters using the land for shepherding purposes. It is undisputed that the IDF undertakes training exercises on these lands from time to time, and as a result during the training, the appellants, together with the residents, are requested to vacate the area not only for security reasons, but also for their personal safety. Moreover, building in the area is not authorized and not legal.

While Israeli military law, Times of Israel has noted, “forbids the expulsion of permanent residents from a firing zone”, the “High Court ruled that Khirbet Humsa’s residents did not meet that standard”.

If the Irish Times wanted to provide evidence purporting to undermine the multiple rulings by Israel’s top court – respected internationally for its independence – on the issue of the Khirbet Humsa encampments, they could have done so.  Instead, their reporter ignored these legal decisions all together, suggesting that it wasn’t so much an impartial investigation of the facts as it was a conclusion in search of evidence.