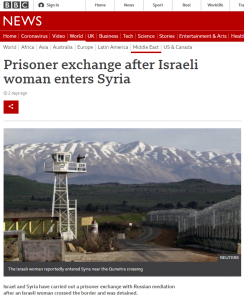 “Israel and Syria have carried out a prisoner exchange with Russian mediation after an Israeli woman crossed the border and was detained.

Two shepherds held in Israel were returned, the Israeli military announced on Thursday.”

Readers were told nothing more about those ‘shepherds’ or the fact that they were “held in Israel” because they had crossed the border in the opposite direction.

Neither were readers given any information concerning the Syrian regime’s original demand for the release of two different people.

“Syrian state media announced on Wednesday: “The exchange is taking place through Russian mediation to liberate the Syrians Nihal Al-Maqt and Dhiyab Qahmuz, the Syrian prisoner from the occupied Syrian Golan, in an exchange during which a young Israeli woman who entered the Syrian territories by mistake will be released.”

Those negotiations however ran into difficulties when the two refused to be deported to Syria:

“Israel is seeking the release of an Israeli woman who recently crossed the border and was arrested. […]

In return for her release, Israel is expected to free incarcerated Golan Heights residents Nihal Al-Maqt and Dhiyab Qahmuz. However, the two are refusing to be sent to Syria as part of the deal, holding up the completion of the exchange, according to Hebrew media reports. […]

Al-Maqt, a resident of Majdal Shams in the Golan Heights, comes from a family of prisoners, all of whom oppose Israeli rule over the zone. She was indicted by an Israeli court in 2017 for incitement, according to Syrian media. Al-Maqt told Syrian Al-Ikhbariya TV on Wednesday afternoon that she had been released from house arrest.

Qahmuz, a resident of Ghajar in the Golan, was sentenced to 16 years in prison in 2018 for plotting a terror bombing in coordination with Hezbollah in Lebanon.”

Anyone familiar with the region would find Israeli media reporting on the topic of the location of the woman’s crossing of the border more plausible:

“Hebrew media reports said the woman crossed into Syria near Mount Hermon, in an area that does not have a security fence. She is believed to have gotten there through a valley that leads from the community of Majdal Shams.”

The report ends with a map which – not for the first time – unhelpfully presents the demilitarised zone created in 1974 as a result of the Agreement on Disengagement between Israeli and Syrian forces as an “Area of separation”.

One reply on “Gaps in BBC News prisoner exchange report”