Recent BBC coverage of the International Criminal Court (ICC) announcement of the commencement of an investigation into alleged war crimes has been notable for one particular repeated omission.

On March 3rd the BBC News website published a report headlined “ICC opens ‘war crimes’ investigation in West Bank and Gaza” in which readers are told that: [emphasis added] 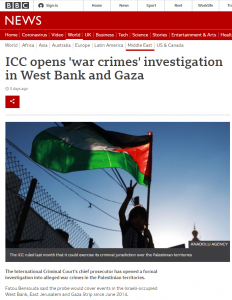 “Fatou Bensouda said the probe would cover events in the Israeli-occupied West Bank, East Jerusalem and Gaza Strip since June 2014.”

Later in the report readers find the following:

“When the Palestinians asked to accede to the Rome Statute, they recognised ICC jurisdiction for the purpose of prosecuting alleged perpetrators of crimes from 13 June 2014 onwards.

That is one month before a war erupted between Israel and Palestinian militants in Gaza.”

The BBC did not bother to tell its audiences of the full significance of that date. As the Times of Israel explains:

“The June 13, 2014, date is significant. Palestinian terrorists kidnapped and murdered three Israeli teenagers in the Gush Etzion area of the West Bank the day before. By asking for an investigation beginning on June 13, the Palestinians ensured that the ICC will not look into the killing of Eyal Yifrach, Gil-ad Shaer, and Naftali Fraenkel.”

Nevertheless, the BBC chose to amplify Bensouda’s claim that “the investigation would be conducted independently, impartially and objectively, without fear or favour”. 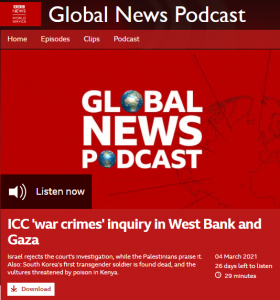 Sanderson: “It didn’t take long for Israel’s prime minister to reject the International Criminal Court’s decision to investigate alleged war crimes in the Palestinian territories. Benjamin Netanyahu called the probe ‘the essence of antisemitism’. […] In fact the inquiry will look at possible transgressions by Palestinians as well as Israelis when it looks into events since June 2014 across the Israeli-occupied West Bank, East Jerusalem and Gaza Strip. The US-based campaign group Human Rights Watch has praised the ICC announcement and a spokesman for Hamas says the Palestinian group is ready to work with the court.” [emphasis added]

Neither Sanderson nor the BBC Jerusalem bureau’s Tom Bateman who was subsequently brought in to report on the story bothered to explain the significance of that date, even though it is relevant to the issue of Israel’s rejection of the ICC investigation. As we see, listeners were not informed that ‘Human Rights Watch’ is a political NGO which has itself engaged in campaigns against Israel or that “the Palestinian group” Hamas is in fact a terrorist organisation.

The March 3rd evening edition of the same radio station’s ‘Newshour’ programme ran with the same lead story which was described as follows in its synopsis: [emphasis added]

“The ICC chief prosecutor Fatou Bensouda said the probe would cover events in the Israeli-occupied West Bank, East Jerusalem and Gaza Strip since June 2014. The ICC has the authority to prosecute those accused of genocide, crimes against humanity and war crimes on the territory of states party to the Rome Statute, its founding treaty. Israel has never ratified the Rome Statute, but the court ruled that it had jurisdiction because the United Nations secretary general accepted the Palestinians’ accession to the treaty in 2015.”

Presenter Tim Franks told listeners in his introduction (from 00:11 here) that: 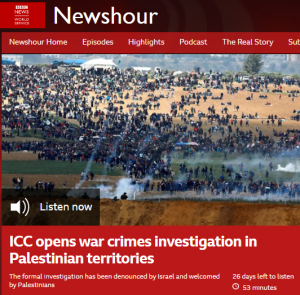 Franks: “We’ll begin in the Hague with the chief prosecutor of the International Criminal Court saying that she’s opened a formal examination of possible war crimes in the Palestinian territories. Fatou Bensouda says her investigation will cover events in the Israeli=occupied areas of the West Bank, East Jerusalem and the Gaza Strip since 2014.”

Franks: “Victor Kattan is from the school of law at Nottingham University here in the UK.”

Kattan told listeners that “the scope of the investigation will look at crimes committed from the 13th of June 2014 and any future crimes.”

Once again listeners were not informed of the reason for and significance of that start date and the fact that the ICC’s investigation will not include the murder of three Israeli youths by Hamas.

Following his conversation with Kattan, Franks introduced his second interviewee (BBC ‘frequent flyer’ Mustafa Barghouti) by saying “let’s hear from the two sides now”. Listeners were not told that in fact they had already heard from one of “the two sides” because the person twice laconically described only as being from Nottingham University is also a policy advisor for Al Shabaka, a former employee of Badil and a former legal adviser to the Palestinian Negotiations Support Project which advises the PLO.

One would of course have expected that Kattan’s writings on the topic of the ICC (which include the claim that “A Palestinian state existed prior to 1967”) would have prompted the ‘Newshour’ production team to comply with BBC editorial guidelines concerning ‘contributors’ affiliations’ but that was not the case. Not only were listeners told nothing of Kattan’s “particular viewpoints”; they were wrongly led by Franks to believe that he is an impartial academic.

ANOTHER SUPERFICIAL BBC NEWS REPORT ON THE ICC