To understand just how deceitful, inflammatory and propagandistic an editorial published at the British Muslim news site 5 Pillars on March 8th is, you can read it in full here.  Or, you can read our post about it here, which unpacks some of the more egregious errors, omissions and lies.

This morning, we complained to 5 Pillars about a few clear factual errors in the editorial (“Masjid Al-Aqsa: Its history, its significance and the urgent need for protection”), which, as we noted in our post, is a version of ‘The Mosque is Danger’ canard that has fueled antisemitism, including anti-Jewish violence, for nearly a century.

They upheld our complaint.

First, we argued that their claim that the “Zionist family” pictured below, whose Purim visit to the Temple Mount they attempted to portray as sinister, “forced their way” onto al-Aqsa, a version of the ‘Jews are storming the mosque’ lie peddled consistently in the pro-Palestinian media, was clearly inaccurate. 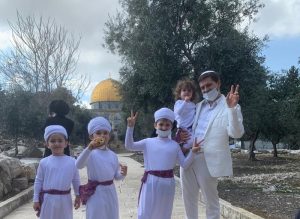 We noted that Jews are allowed to visit the area, and the idea that the father and his small children overran security at the holy site is absurd.

Here’s the original wording from the editorial:

At first glance it appears nothing more than a sweet family moment. Yet this was a Zionist family who had forced their way into Al-Aqsa…

Editors agreed, and changed the words “forced their way” to the more neutral “entered”.

At first glance it appears nothing more than a sweet family moment. Yet this was a Zionist family who had entered Al-Aqsa…

They also originally described the family’s visit as an “incursion“.

But the blatant incursion of this family (which is just one of many) says otherwise.

Following our complaint, they removed the word “incursion”, and revised the sentence thusly:

But the behaviour of this family (which is just one example of many) suggests otherwise.

The second complaint concerned their characterisation of the 1969 Temple Mount fire, started by a mentally ill Christian man from Australia, where they peddled the libel that Israelis tried to prevent Palestinians from putting out the fire – a claim, we showed in our original post, that’s the opposite of the truth.

Fire brigades were called but the occupying Israeli army refused to let the fire engines from across the West Bank enter.

Though they refused to remove the claim, they revised the wording to note that this is merely a “Palestinian account”.

According to Palestinian accounts, fire brigades were called but the occupying Israeli army refused to let the fire engines from across the West Bank enter.

Finally, editors also removed the photo of the “Zionist family” from the editorial.

Though we welcome these modest improvements, the editorial, portraying four small Jewish children visiting a Jewish holy site in Jerusalem with their father on Purim, as somehow representing “a threat to Muslims worldwide”, as they worded it in their conclusion, is still an act of journalistic malice and outright incitement.