While one can debate the relevance of that particular article for the site’s international audiences who will be unfamiliar with the person and the organisation, its appearance highlights a broader pattern in BBC reporting on legal and/or criminal cases.

Since January 2020 visitors to the ‘Middle East’ page have seen twenty-one reports (including the above) relating either to legal cases in Israel or to cases not in Israel but involving Israeli citizens. 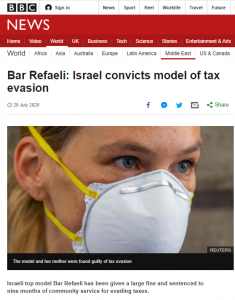 In the same period of time visitors to the BBC News website’s ‘Middle East’ page have seen just two reports (both relating to the same story) concerning legal cases in the areas under Palestinian Authority or Hamas control.

The fact that BBC audiences saw over ten times more coverage of legal matters involving Israelis than those involving Palestinians in the past 15 months once again highlights the BBC’s reluctance to inform its audiences about internal Palestinian affairs.