A Telegraph review of a book about Edward Said, (How Edward Said took on orientalism; The Palestinian critic became the embodiment of ‘radical chic’ – then the world forgot his subtleties, March 13) by Rupert Christiansen, included the following claim:

In 1951, in the wake of Israel’s expropriation of Palestinian lands, the Said family moved to the US, where Said enjoyed an Ivy League education.

First, it wasn’t the “Said family” that moved to the US in 1951, it was just Edward Said. And, Said moved from Cairo, the location of his family home, not, as readers would likely intuit from a previous sentence about his city of birth, from Jerusalem.

Here’s a 2003 NY Times correction to their obituary on Said, an anti-Zionist and post-colonial theorist sometimes described as the most influential Palestinian intellectual, which had initially claimed his family home was in Jerusalem: 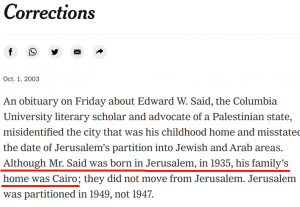 Also, he (alone) was sent, by his father – again, from Cairo – to the US (to a boarding school in Massachusetts) because he was expelled from an elite British-run school in Cairo. His classmates at the school included the future King Hussein of Jordan.

More importantly, contrary to the journalist’s claim that his move was connected to “Israel’s appropriation of Palestinian lands”, a propagandistic and ahistorical euphemism for the 1948 Arab-Israel War, Said – as he later acknowledged – left Jerusalem when he was two, and was never a refugee. (In fact, even by Said’s own earlier false accounts, his family left Jerusalem for Cairo in 1947, a year before the 1948 war.)

Most of these facts were revealed by the Telegraph itself in an obituary for Said in 2003, which was partly based on research by the late scholar Justus Reid Weiner debunking the Palestinian intellectual’s fabrication of his personal biography.  “His family had”, the editorial noted, “…as Said later acknowledged…left Jerusalem when he was two, and he was never a refugee“.

Contrary to Mr. Christiansen’s suggestion, which plays into the mystique Said created about himself, Israel played no role in his departure from the Middle East.

We’ve complained to Telegraph editors about this egregiously misleading claim.