From late 2016 onwards the BBC produced a plethora of reports relating to the May 2018 relocation of the US embassy to Jerusalem, often framing the decision of the US administration at the time as “a controversial departure from long-time international policy”.

In contrast, coverage of Guatemala’s relocation of its embassy to Jerusalem (in the same building as the BBC office) two days later was minimal: 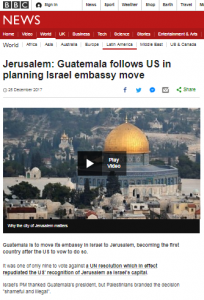 MAPPING THE BBC’S BRANDING OF DECLARATIONS ON JERUSALEM AS ‘CONTROVERSIAL’

The latest new embassy to open in Jerusalem has received even less coverage. To date BBC audiences have seen no reporting on the establishment of diplomatic relations between Israel and Kosovo last month and the subsequent opening of Kosovo’s embassy on March 14th.

“Kosovo opened an embassy to Israel for the first time on Sunday, making it the third country with an embassy currently in Jerusalem. […]

Unlike outlets such as Reuters, AP, the Guardian and the Washington Post, the BBC apparently did not consider that story – or the opening of an embassy office in Jerusalem by the Czech Republic on March 11th – to be newsworthy.

0 replies on “Latest Jerusalem embassy opening ignored by the BBC”