Over the past two months we have been taking an occasional look at developments in a story that the BBC (with the exception of one brief reference) has so far chosen to completely ignore: the scheduling of Palestinian elections for the first time in 15 years.

On March 20th potential candidates in the May 22nd election for the Palestinian Legislative Council began submitting their lists and that process will continue until March 31st. 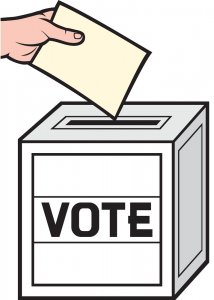 “The [central elections] commission said that candidacy is through electoral lists on the basis of full proportional representation, and individual candidacy applications are not accepted. The number of candidates for each list should not be less than 16 and no more than 132.

On the first day, three lists were presented to the commission: 1 – Democratic Change, which is affiliated with the PLO’s Marxist-Leninist Democratic Front for the Liberation of Palestine (DFLP), 2 – Palestine For All, headed by Gaza Strip resident former PA labor and housing minister Mufeed al-Hasayna, 3 – My Dignity, headed by Dr. Mansour Salamah, a prominent academic and researcher from the city of Tulkarm in the northern West Bank. […]

The commission is scheduled to study candidacy applications within five days from the date of their submission before deciding whether to accept or reject them.

One of the new lists which will potentially run in the PLC election is called the National Democratic Forum. Its head – Nasser al Qudwa – was expelled from Fatah earlier this month after having announced its establishment. According to later reports al Qudwa (a nephew of Arafat) was also fired from his post as head of the Yasser Arafat Foundation and that organisation’s funding was suspended.

Al Qudwa apparently offered a place on his list to another of Abbas’ potential rivals – Marwan Barghouti who is currently serving five life sentences for his role in terror attacks – but the picture remains unclear with some claiming that Barghouti will run against Abbas in the presidential election scheduled for July 31st. 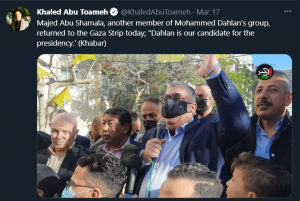 Another name touted as a potential runner in the July presidential election has been that of Mohammed Dahlan who was expelled from Fatah a decade ago and has since resided in the UAE, from where he has of late sent 60,000 doses of Covid-19 vaccines to the Gaza Strip. As reported at the Jerusalem Post:

As for the ongoing question of whether a newly-elected PLC will honour existing agreements with Israel, MEMRI reports that:

“Hamas political bureau member Salah Bardawil clarified on March 2, 2021 that Hamas’s participation in the PLC elections does not indicate any change in its positions: “We will not recognize the occupation or the Oslo [Accords] after all the sacrifices we have made as part of resisting the occupation… Our resistance weapons are not [subject to] debate with anyone.” He added that Hamas would not relinquish its principles despite regional and international pressures, hinting at the conditions set out by the Quartet…”

Another meeting of Palestinian factions in Cairo earlier this month resulted in an agreement to abide by an ‘honour code’.

“The Palestinian factions, which included the rival Fatah and Hamas movements, pledged not to incite “religious, sectarian, tribal, regional, familial or racial sentiments” and to refrain from violent intimidation.

The agreement, as circulated in Palestinian media, also contained a clause forbidding open displays of weaponry at rallies. Gunmen can occasionally be seen at Palestinian political gatherings, as many of the main parties have armed wings.”

While some observers are still sceptical as to whether often promised and long delayed elections will actually take place, it is nonetheless remarkable that the BBC, with its offices in Jerusalem, Gaza City and Ramallah, continues to maintain radio silence on the topic of such significant developments in domestic Palestinian politics.