On the morning of March 22nd visitors to the BBC News website’s ‘Middle East’ page found the first item relating to the following day’s general election to appear since December 2020. 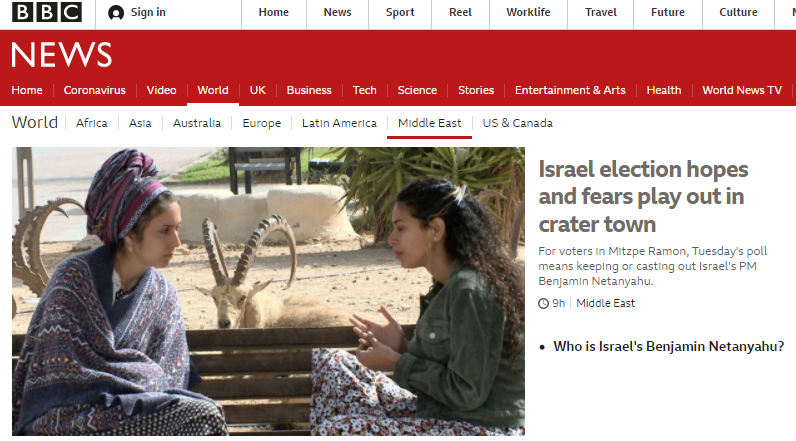 That sub-heading and indeed the rest of Tom Bateman’s article titled “Israel election hopes and fears play out in crater town” fails to inform readers that in all of the five general elections held between January 2013 and March 2020 (see here, here, here, here and here), the Likud party secured the most votes in Mitzpe Ramon.

Bateman brings the voice of one resident who does not intend to vote Likud, together with some unevidenced framing concerning freedom and democracy:

“It’s no, no, no to Bibi and his friends,” says Boaz Katz, who runs Desert Prime tours. He has seen business drop by two-thirds since the start of the pandemic.

He steers his 4×4 over rocks into the crater’s core, hinting at worries shared by many Israelis.

“I think about the future a lot and it spooks me to see Benjamin Netanyahu and his natural companions – I want to live in a free, democratic country,” says Mr Katz, who used to vote for Mr Netanyahu’s Likud party.

The prime minister has been met with protests over his desire to rewire parts of the justice system while on trial for corruption. Others oppose his long-standing pact with ultra-religious parties.” [emphasis added]

Referring to another interviewee who does intend to vote Likud, Bateman states:

“Her parents fled Algeria in the 1940s. Decades later, she came to Mitzpe Ramon, a development town providing low-cost homes for Jewish immigrants, many from Arab countries. The community now forms a base of working-class support for Mr Netanyahu.”

No mention is made of the fact that prior to the arrival of new immigrants from North Africa, Romania and later the former Soviet Union, the small town was known as being predominantly made up of Mapai voters. 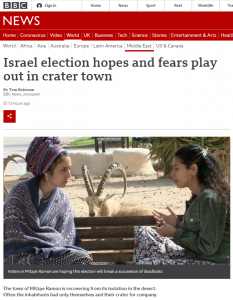 The final section of the article is sub-headed “Deep distrust” and it opens with Bateman’s blanket categorisation of Arab-Israelis as “Palestinian” (just as he did ahead of the election in September 2019 and as has been evident in additional BBC reporting since that time) despite the fact that a poll conducted last year showed that only 7% of the minorities in Israel define themselves as Palestinian.

“The outcome could rest on how smaller parties do. In an unlikely move, Mr Netanyahu has tried to get support from Palestinian citizens of Israel, who make up a fifth of the population.”

“”We all know he [Netanyahu] is lying to people,” says Huda Abu Obaid, a community organiser in the Bedouin town of Lakiya.

She believes Mr Netanyahu wants to further divide support for a group of Arab parties, which could strengthen his hand in coalition building.

“We know very well that he was the worst one for us, for the Arab community, and I think that he will not change himself,” she says.” [emphasis added]

Despite the existence of BBC editorial guidelines concerning ‘contributors’ affiliations’, readers are not informed that in Ms Abu Obeid’s case “community organiser” means “lobby and employment coordinator” for the political NGO ‘Negev Coexistence Forum for Civil Equality’. The same inadequate presentation of that interviewee was heard in an audio version of Bateman’s report aired on BBC Radio 4’s ‘Today’ programme on the same day (from 44:14 here).

Although not clarified to readers, Bateman’s reference to “a group of Arab parties” means the Joint List which now comprises three parties (Hadash, Balad and Ta’al) following a split with Ra’am in February about which BBC audiences have heard nothing at all. Even before that split the Joint List was polling a significantly lower number of Knesset seats than it won in the last election.

“The Joint List currently holds 15 seats in the Knesset. But it is likely to take a heavy hit in the next elections, with some polls projecting as low as 7 or 8 seats for the three Arab parties.

Its coalition had previously included the conservative Islamist Ra’am party, run by renegade Arab MK Mansour Abbas. The split between the two parties badly damaged the image of Arab Israeli unity that had helped lead to surging turnout among their base.”

The background to that split was described at the time as follows by the Jerusalem Post:

“Ra’am (United Arab List), a conservative Muslim party made up of the southern branch of the Islamic Movement, decided last week to leave the Joint List after the other parties refused two ultimatums to vote together against LGBTQ issues, and to be able to have greater freedom to vote with the Right. […]

Party leader Mansour Abbas has advocated pursuing alliances with Prime Minister Benjamin Netanyahu and parties on the right in an effort to better serve his Arab constituency, but cooperation with Netanyahu is not seen as realistic within the Arab community. […]

…the Joint List’s performance over the past two years is rated poorly among Israeli Arabs, especially among young voters. This is evidenced by the drastic drop in mandates the list has seen in polls since the last election.

Clearly there are many more aspects to the story of reduced support for the Joint List than Tom Bateman’s Netanyahu-centric, monochrome and superficial report portrays.