Previously we have discussed a rolling article – and some of its subsequent amendments – produced by the BBC’s ‘fact-checking arm’ known as ‘Reality Check’ which was originally published on January 26th under the title “Covid-19: Why are Palestinians not getting vaccines?”.

The latest amendments to that article – which is currently headlined “Covid-19: Palestinians lag behind in vaccine efforts as infections rise” – were made on March 22nd and they include the by then five-day-old news that vaccines from the WHO’s COVAX scheme had arrived in Ramallah. 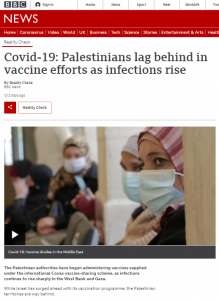 “The Palestinian authorities have begun administering vaccines supplied under the international Covax vaccine-sharing scheme, as infections continue to rise sharply in the West Bank and Gaza. […]

The first consignment of vaccines provided by the Covax scheme to help poorer countries access supplies has now arrived in the West Bank and Gaza.”

Under the sub-heading ‘What’s happening in the Palestinian areas?’ readers are informed that:

“The Palestinians have sourced some limited quantities of vaccines from elsewhere.

A delivery of 10,000 doses of Russian-made vaccine has arrived, 2,000 of which have been sent on to Gaza. Gaza has also received 20,000 Russian vaccine doses donated by the UAE.”

In fact, a further 40,000 doses donated by the UAE arrived in the Gaza Strip on March 11th but the BBC’s ‘fact checking arm’ continues to ignore that consignment. Despite some 83,000 doses of vaccines having been delivered the Gaza Strip to date, the latest version of this article continues to promote the redundant notion that:

“Getting vaccines to Gaza is faced with the logistical challenges of the restrictions imposed on the area, which has been under blockade by Israel and Egypt since the militant Islamist movement Hamas took charge there in 2007.”

“In occupied East Jerusalem, all Palestinians are entitled to be vaccinated by Israel, as are medics working at the six Palestinian hospitals there – many of whom come from other parts of the West Bank and Gaza.

Palestinians in East Jerusalem have Israeli residency status – so those living there pay Israeli taxes and have access to Israeli health insurance.

Israel did not initially offer the vaccine to other Palestinians until early March, when it decided to start vaccinating all Palestinians who come to work in Israel or in Israeli settlements in the West Bank.

There are around 133,000 such workers, according to the Palestinian Central Bureau of Statistics, with many crossing over to Israel from the West Bank on a daily basis.”

The article fails to clarify that in the days between the beginning of that vaccination drive on March 8th and March 18th, over 105,000 Palestinian workers received the first dose of the inoculation and that administration of the second dose is set to commence on April 4th.

Neither are BBC audiences told of the PA prime minister’s attempt to claim that those 105,000 Palestinian workers were vaccinated by the Palestinian Authority ministry of health rather than by Israel.

“…Israel has vaccinated 105,000 Palestinians who work in Israel or Israeli settlements. Shtayyeh claimed in his remarks, however, that the PA had vaccinated them.

“Over the last two weeks, we have undertaken the inoculation of over 105,000 Palestinians who work in Israel. Health Ministry teams administered their shots,” Shtayyeh said.”

Subsequent reports that the Palestinian Authority is charging money for vaccination certificates have likewise not yet been mentioned by the BBC.

Like all previous versions of this article, the latest one includes a final section headed “Whose responsibility is it to vaccinate Palestinians?” which has barely changed since its initial publication and continues to promote claims made by “UN experts” without clarification of who they are and the highly relevant political agenda of one of the two.