On the morning after Israel’s general election – March 24th – one edition of the BBC World Service radio programme ‘Newsday’ included an item described as follows: 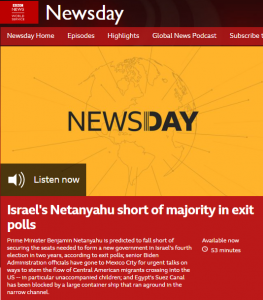 “Prime Minister Benjamin Netanyahu is predicted to fall short of securing the seats needed to form a new government in Israel’s fourth election in two years, according to exit polls;”

In that item (from 15:42 here) presenter Clare McDonnell discussed the exit polls with Richard Pater of BICOM.

McDonnell: “Richard, he’s [Netanyahu] claiming a victory but it’s a victory of sorts – isn’t it? – because he will have to strike a deal with – many people are raising concerns about far-right groups – to have a majority.”

After Pater had pointed out that at that time the actual results had yet to come in but the exit polls suggested a very slim majority for the Netanyahu camp, McDonnell pursued her theme.

McDonnell: “There are concerns that he’s [Netanyahu] going to have to get into bed with ultra-orthodox parties…ahm Shas party for example who have anti-gay views, anti-women…ahm…anti-women views…ahm…they want to…ahm…expel disloyal Arabs from the state. Ahm…what are people saying about the kind of coalitions he may have to forge?” [emphasis in bold added, emphasis in italics in the original]

According to the Israel Democracy Institute the Shas party did not put out a manifesto ahead of the latest election. In fact, the last manifesto Shas did publish was in 2006 and that document of principles focuses on social, environmental and economic issues.

CAMERA UK has therefore written to the BBC to ask what evidence – if any – it has to back up McDonnell’s claim that the Shas party wants to “expel disloyal Arabs” from Israel.