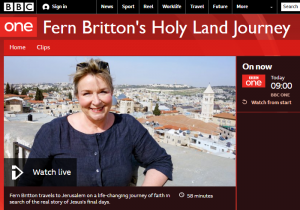 “Fern Britton travels to Jerusalem on a life-changing journey of faith in search of the real story of Jesus’s final days, from his triumphal arrival to his brutal crucifixion. It is an emotional trip which culminates with Fern’s decision to mark her pilgrimage in a way she will remember forever.

Ever since Sunday school, Fern has known of the events that took place in Jerusalem 2,000 years ago. Now, as an adult and a committed Christian, she wants to truly grasp their significance – how Jesus entered Jerusalem at the height of his mission, only to be betrayed, abandoned by his closest followers and condemned to suffer the cruellest of deaths on the cross.

Fern wants to understand the humanity of Jesus to get a sense of what he went through during those final days. How did Jesus’s crucifixion come about? What he was feeling? And what did it all mean? To find out, she meets local experts and experiences the sights and sounds of the places where Jesus once walked.”

Some nine minutes into that otherwise apolitical 58-minute film, viewers are told that: [emphasis in italics in the original, emphasis in bold added]

“The gospels tell us that before Jesus and his disciples entered Jerusalem, they first went to a village on its outskirts. In biblical times, this town was called Bethany. Now it’s al-Eizariya. This is a nice little town. People going about their daily business on a Monday morning. But life here isn’t as simple as it first looks because, running through the town, is a wall built by Israel for what it says are security reasons. Oh, my goodness! Now you’ve heard about the wall. Look at this. This is the wall. And that is not a thing of beauty, is it? Oh, my goodness, look! You hear about humans erecting big walls like this in the middle of cities. Obviously Berlin, here, possibly between Mexico and America. This is madness. Just to keep the people out. You wouldn’t be able to climb up that – would you? – that’s for sure.”

Although viewers hear blatant editorialising from Fern Britton, as is the case in so much BBC content relating to that topic, they receive no proper explanation of why the anti-terrorist fence was constructed and hear no mention whatsoever of the thousands of Israelis murdered and injured in the suicide bombings and other terror attacks that structure was designed to prevent.

Not only did the BBC fail to address that glaring breach of BBC editorial guidelines on impartiality when the programme was first shown in April 2017, it found fit to rebroadcast it in Easter programming in 2019 and now again in 2021.