Any film with a pro-Palestinian message is all but guaranteed to garner a positive review by the Guardian, and their recent profile of a short film – nominated for an Academy Award for best Live Action Short – by British film-maker Farah Nabulsi called ‘The Present’ is no exception.

The piece by Cath Clarke (“Film-making? Bring it on!’: ex-stockbroker Farah Nabulsi on her Oscar nomination”) focuses in part on the unlikely journey of a well-to-do British women to film-maker:

Seven years ago, [Nablusi] went back [to the Palestinian territories] for the first time in 25 years. It was life-changing. “That first trip was everything,” she says, and the words come out in a rush: “There’s 100 Israeli checkpoints all over the West Bank. This is not in Israel.” Her hands hang in the air at the indescribability of it. “This is in the West Bank. And there’s the wall that separates families and separates people from their work, from their lands, from their schools. You’ve got these illegal settlements, illegal by international law.”

She talks about the separate licence plate system, separate roads, and the military policing of Palestinians:”

Her skewed view clearly informs the (Qatari-funded) film she created.

Though the Guardian piece is framed as an interview, and not a film review as such, it does include a short summary of the 20-minute drama.

The film is Nabulsi’s directing debut, a powerful 20-minute piece of humanist cinema about a Palestinian man, Yusef (Saleh Bakri), who wants to surprise his wife with a fridge as an anniversary gift. He takes the couple’s young daughter, Yasmine (Mariam Kanj), shopping. But their big day out is ruined by two encounters with Israeli soldiers at a checkpoint. Yasmine is a witness to her dad’s humiliation – she tugs on his sleeve, reminding him to bite his tongue, to swallow the soldiers’ insults.

There’s an astonishing scene in the film when Yusef passes through an Israeli checkpoint on his way home from work. It’s chaos, thousands of men crammed into a narrow subway. A few men bypass the queue by climbing nimbly across the steel bars above.

Nabulsi and two cameramen shot the scene documentary-style at the notorious Checkpoint 300, in Bethlehem, surrounded by Palestinian men going to work; they arrive as early as 3am to queue, and during rush hour it can take three hours to cross…

“It’s humiliating and dehumanising standing there. This is not right for any human being. Animals should not be treated like this. This checkpoint has been made for maximum discomfort. You feel that.”

Nabulsi says she wanted to show the decency and kindness of ordinary people. “It’s about tearing down the stereotype of how a dark, bearded man is portrayed on the big screen, as the terrorist or whatever. No. This lovely guy is what many bearded big Arab-Palestinians are like.”

We watched the film, which is available on Netflix, and what’s clear is that Nablusi wanted to show the decency and kindness of ordinary Palestinian people.  Israelis, by contrast, were, without exception, depicted as ugly caricatures, the embodiment of human cruelty and racism.  During one scene, a solider screams “You’re all disgusting” to the Palestinian protagonist, Yusef, after opening a malodorous bag containing the wet pants of his young daughter, who earlier had an accident. 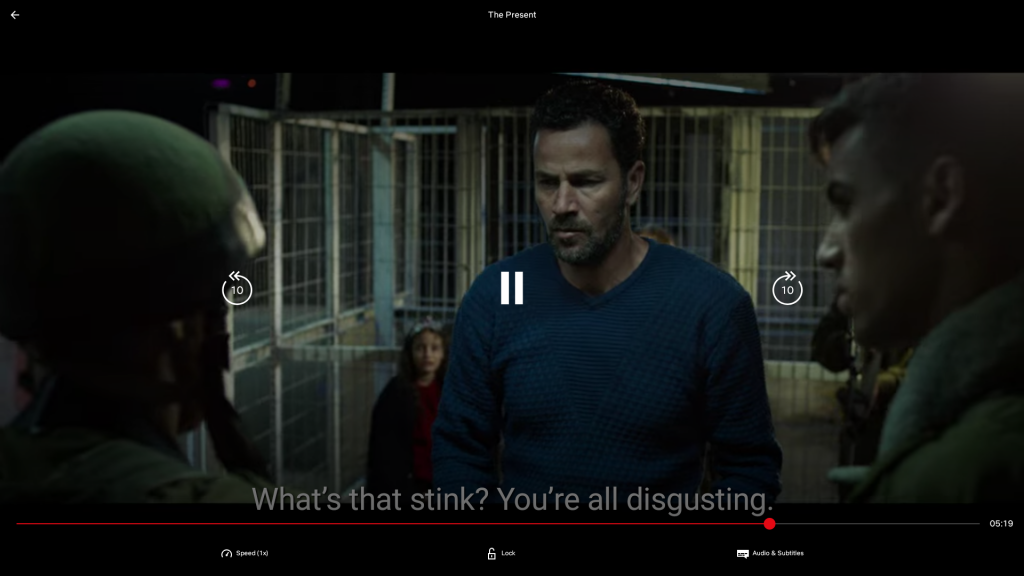 As in her description of checkpoints in the Guardian interview, Nablusi’s film didn’t hint at the reasons for such security measures, and, indeed, those unfamiliar with Israel’s experience with terrorism could easily assume the primary goal of checking pedestrians and vehicles is to humiliate innocent Palestinians.

Ultimately, the film is more propaganda than art, lacking even a modicum of nuance or moral complexity, with the Palestinian protagonists unblemished by even a trace of human frailty – a fact, as those familiar with the increasing wokeness of the Academy Awards would know, gives Nablusi a great shot at capturing an Oscar.