Two months have passed since the BBC issued a clarification indicating that it is well aware of the fact that under the terms of the Oslo Accords, the Palestinian Authority is responsible for the healthcare of Palestinians:

Despite the publication of that clarification, BBC content has continued to deliberately provide an insufficiently clear picture of the terms of the Oslo Accords as part of promotion of a political campaign initiated by an inadequately presented collection of political NGOs usually airbrushed as “human rights groups”.

RADIO 4 IGNORES THE BBC’S OWN CLARIFICATION ON PALESTINIAN HEALTHCARE

On April 1st the BBC Radio 4 programme ‘The Briefing Room’ aired an edition titled ‘Covid-19 and the World’ (repeated on April 6th) which includes a section (from 31:10) relating to the topic of vaccination drives in different countries. 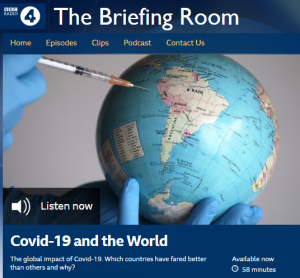 Listeners heard a report supposedly about the highly successful vaccination programme in Israel from the BBC Jerusalem bureau’s Tom Bateman which nevertheless included the following (from 33:00):

Bateman: “But it’s [the vaccination programme] been wrapped up in controversy too. Human rights groups point to a painfully slow vaccine roll-out for five million Palestinians in the West Bank and Gaza. They say Israel, as the occupying power, has responsibility. The Israeli government denies this, saying the Oslo peace accords hand such jobs to the Palestinian Authority, which has limited self-rule. It has struggled to procure doses and most Palestinians are still waiting. Israel has though immunised a hundred thousand who have Israeli work permits.” [emphasis in italics in the original]

Once again Bateman afforded the organisers of the political campaign he and his colleagues have been amplifying since early January the halo of “human rights groups” while failing to make any attempt to clarify to audiences that they include political NGOs (in some cases foreign funded) with a record of lawfare campaigns against Israel.

Yet again – despite the BBC’s February 9th clarification concerning PA responsibility for Palestinian healthcare – Bateman presented Article 17 of the 1995 Oslo Accords as something that only ‘Israel says’ is the case. Once again he created false linkage between the topic of Israel’s vaccination roll-out and the separate inoculation drive which is the responsibility of the Palestinian Authority. And once again Bateman promoted the notion that the latter has “limited self-rule” despite the fact that the vast majority of Palestinians live in areas where the PA has complete control over civilian affairs.

The BBC’s publication of that clarification concerning the Oslo Accords continues to be ignored by its Jerusalem bureau correspondent.