An op-ed by Yara M Asi, affiliated with the Washington DC based pro-Palestinian think-tank Al-Shabaka (“The US media is touting Israel’s Covid recovery. But occupied Palestinians are left out”, April 9) is not the first such Guardian piece promoting the view that Israel is fully responsible for vaccinating every Palestinian in Gaza and the West Bank.

Though you can read previous posts where we’ve refuted this specific claim, and cited article 17 of the Oslo Accords which clearly spells out the PA’s vaccine responsibilities, this latest Guardian op-ed is unique in one respect: it’s likely inspired by B’Tselem report in January – that CAMERA eviscerated here– which contended that Israel rules the entire region, from the river to the sea, including not only the PA controlled West Bank, but Hamas-ruled Gaza as well.

Asi peddles this narrative – in a manner suggesting it’s an incontrovertible fact – in these paragraphs:

The difference couldn’t be more stark – two populations living under one regime, heading in opposite directions in the struggle with Covid-19

These differences are evident across health outcomes between the Israeli and Palestinian populations, despite them all living in territory controlled by the state of Israel

The Palestinian Authority (PA) has complete military and civil control over the overwhelming majority of West Bank Palestinians – per the Oslo Accords, the agreement signed by Palestinian leaders that the Guardian op-ed completely ignores in assigning COVID vaccine responsibility to Jerusalem.  Additionally, to argue that Israel “rules” Gaza is even more risible. In fact, the op-ed not only elides Hamas’s military and administrative control of the strip, but fails to use the word “Hamas” (or the words “Palestinian Authority”) even once in the over 1,000 word piece.

Indeed, the failure to mention Palestinian responsibility for COVID vaccinations is part of the broader theme of the op-ed, which frames every disparity between life in Israel and the Palestinian territories as a result of Israeli actions, and, more specifically, Israeli discrimination.

Here’s one example of Asi’s duplicity:

The West Bank has suffered from occasional bouts of violence, but its health system has been most depleted by the Israeli movement restrictions on goods and people both within and entering or exiting the territory.

However, as we’ve demonsrated previously, there are almost no restrictions on medicine or medical related goods entering the Palestinian territories. (The only exception we’re aware of is radio isotopes, used in some cancer detection machines, which is considered a dual-use item – meaning, it could be used for military purposes.)

Asi then makes a broader argument:

These differences are evident across health outcomes between the Israeli and Palestinian populations, despite them all living in territory controlled by the state of Israel. An Israeli, on average, lives ten years longer than a Palestinian. Even Palestinian citizens of Israel have a shorter average life expectancy than their Jewish Israeli counterparts. Infant mortality, a standard global marker of health system performance, is more than five times higher for Palestinians than Israelis.

These stark imbalances are almost entirely manmade. The entrenchment of the occupation and the length of the blockade affect every social determinant of health, including increased psychological trauma, environmental health risks, food and water insecurity, and insufficient access to quality health care facilities.

First, her argument that “Palestinian citizens of Israel” have a shorter average life than their Jewish Israeli counterparts is extremely deceptive.  The source she uses (The Taub Center) shows that the disparity in life expectancy between Arab Israelis and Jewish Israelis is minimal: 79 years vs 82.7.   Regarding this 3.7 year disparity, the report notes that “some of the differences can be explained by social characteristics of the Arab Israeli population such as the marrying among relatives, which increases the chances of birth defects, and high rates of smoking (44% of Arab Israeli men smoke, compared with 22% of Jewish men)”.

The report also notes that the Arab population in Israel (at 79 years) is “the highest in the Arab-Muslim world”.

It’s unclear why Asi would necessarily expect Palestinian life expectancy to be higher if the territories weren’t “occupied” (as she frames it) or, more generally, impacted by Israeli security-related policies, if the life expectancy of some surrounding independent Arab states are the same (Jordan at 74) or lower (Egypt at 72) than the Palestinian average.

Regarding the infant mortality disparities, again, you have to zoom out to get a clearer picture. At 17.5 infant deaths for every 1,000 live births, the Palestinian rate (though much higher than the Israeli rate) is actually lower than the average for all Middle East and N. African states, which is 18.9, and much lower than the world average, which is 29.  In fact, the Palestinian infant mortality rate has dropped dramatically over the last 40 years. 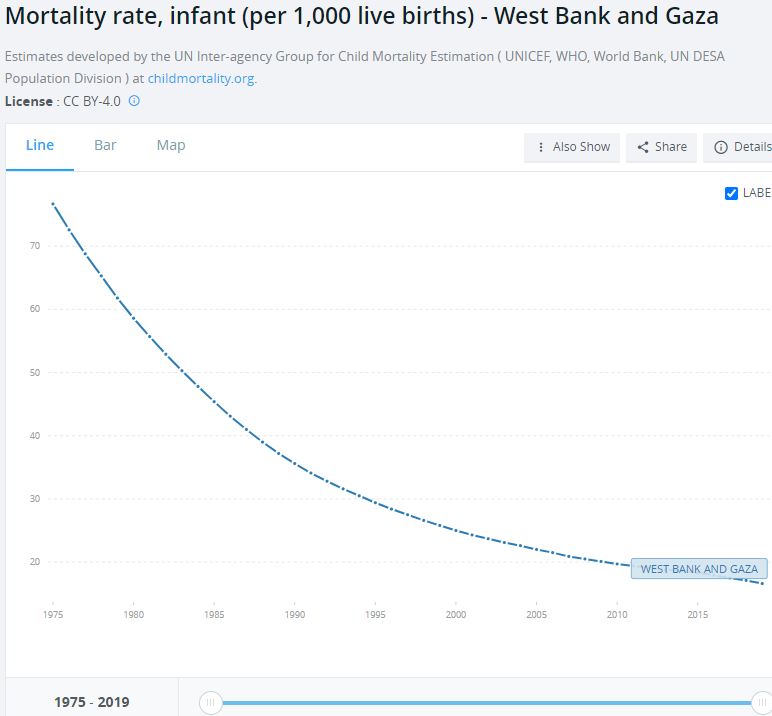 If the occupation negatively impacted Palestinian child mortality rate, you’d expect the chart to show the opposite, or, at least not to show a consistent improvement year after year.

Asi’s assumption that disparities in life expectancy, infant mortality and other health outcomes between Israelis and Palestinians are due to Israeli policies is consistent with radical ideologies currently in vogue which assume all racial or ethnic disparities in outcomes must be based on discrimination – an assumption rarely backed up with empirical data demonstrating this causation.  As we’ve shown with the relatively modest life expectancy disparities between Jewish and Arab Israelis, individual life choices and cultural differences are important factors usually overlooked when debating disparate outcomes.

Consistent with most Guardian coverage of, and commentary on, the region, nowhere in the op-ed does Asi even allude to the role played by the decisions of individual Palestinians or their leadership in their relatively low vaccination rate, or other health challenges.  To do so, of course, would require assigning Palestinians agency, taking them seriously as agents of their own fate and acknowledging what should be the most intuitive fact: that bad Palestinian decisions lead to bad outcomes.

At $32 a dose +/- times 5 million Palestinians ($160 million), the amount the PA spent on Pay to Slay last year ($155 million) could have vaccinated almost the entire Palestinian population https://t.co/Hkv57m2eHG

The corollary of this of course is that good Israeli decisions have led to good outcomes, and that if Palestinians ever decided to end their war, and lawfare, against Israel, and, instead, took a radically different path, promoting cooperation and co-existence with the Jewish state modeled on the Abraham Accords, and began emulating instead of demonising Jerusalem, perhaps peace and prosperity would be allocated more equitably.