A report published on the BBC News website’s ‘Middle East’ page on April 7th under the headline “Biden administration to restore $235m in US aid to Palestinians” follows long-standing templates. 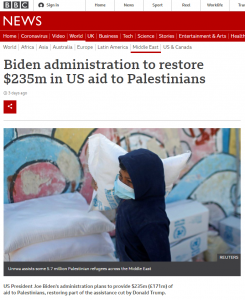 “Israel occupied the West Bank and East Jerusalem in the 1967 Middle East war. Most of the international community considers the settlements illegal under international law, though Israel disputes this.”

As usual audiences are not informed of the Jordanian invasion and occupation of what the BBC chooses to call “the West Bank and East Jerusalem” or the status of those areas prior to that 19-year occupation. As ever, the BBC provides a partial mantra on ‘international law’ without presenting any alternative non-Israeli opinions.

They rejected a peace plan he unveiled last year that envisaged recognising Israeli sovereignty over Jewish settlements in the occupied West Bank and the Jordan Valley, and Jerusalem remaining Israel’s “undivided capital”.”

The BBC does not bother to inform readers that “Palestinian leaders” rejected that proposal even before they had read it or that it included the establishment of a Palestinian state and a significant increase in the amount of land under Palestinian control in what the BBC terms “the occupied West Bank” as well as land swaps in the Negev.

A photo caption and the report’s text tell readers of “5.7 million” Palestinian refugees without any mention of the fact that the number of actual refugees is estimated at several tens of thousands, with all the rest being descendants uniquely afforded automatic refugee status.

“Unrwa assists some 5.7 million Palestinian refugees across the Middle East”

“The agency was originally set up to take care of hundreds of thousands of Palestinians displaced by the 1948 Arab-Israeli war.

It says it now supports some 5.7 million registered refugees in Gaza, the West Bank, Jordan, Syria and Lebanon, including by providing them with healthcare, education and social services.”

In a section of analysis of the story from the BBC Jerusalem bureau’s Yolande Knell readers are told that:

“At Qalandia refugee camp in the occupied West Bank, Hassan Abu al-Eish, 85, said he had felt the effect of the cuts in aid and was left unable to afford the basics. “When Trump arrived, he stopped all the Unrwa funds and closed all the doors on us,” he commented.”

Readers are not told why that refugee camp and eighteen others still exist in territory which has been under the control of the Palestinian Authority for over a quarter of a century or why some Palestinian citizens still receive services from the UNRWA refugee agency rather than from the PA.

Under the sub-heading “What does Unrwa do?” readers are told that:

“…in 2018, the Trump administration said it was ending all support for Unrwa, calling it “irredeemably flawed”. The agency strongly rejected the accusation.”

Readers find no explanation of that criticism of UNRWA and no mention of the scandal – studiously ignored at the time by the BBC – which led to its previous head’s resignation.

Yolande Knell’s analysis goes on to inform audiences that:

“This news has come as a huge relief to Palestinians. Their economy is propped up by international donors and was left reeling by the dramatic cuts of the Trump administration.”

Predictably Knell refrains from mentioning the Palestinian Authority’s policy of paying salaries to terrorists and their families which has continued throughout.

In addition Knell refers to a topic which readers may well find confusing, given that the BBC has refrained from covering it since January:

“…steps to resurrect negotiations for a two-state solution appear unlikely until the impact of Israel’s latest inconclusive general election becomes clearer and after Palestinian elections due in the coming months.” [emphasis added]

Although the registration of runners in the PLC election scheduled for May 22nd closed at the end of last month, BBC audiences have not seen any coverage whatsoever of the 36 lists approved and the related split in the Fatah faction.

Chronic under-reporting of internal Palestinian affairs together with the use of template mantras concerning complex issues and half-told stories mean that once again BBC audiences see a one-sided and simplistic account of a topic that is in fact far more complex than this report suggests.