(All translations, emphases and in-bracket remarks are by CAMERA Arabic, unless otherwise specified)

Following the March 2021 passing of one of Baghdad’s very last Jews, 61-year-old Dr. Dhafer Fouad Eliyahu, BBC Arabic published a report titled “Jews of Iraq: only four [in number] after the passing of the last doctor from the community”. 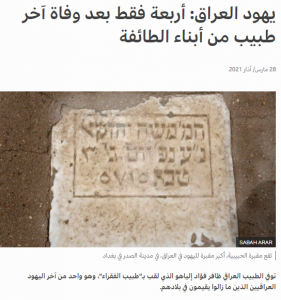 Parts of the report were based on a March 28th AFP Arabic report on the same story. (A similar English version from March 27th is found here).

Notably, the edits BBC Arabic made to the original AFP text consistently downplayed the suffering experienced by the local Jewish community, often at the hands of the Iraqi state, as well as surrounding Muslim majority.

Below are the relevant AFP Arabic language passages (translation from Arabic is largely based on the corresponding AFP English report, with CAMERA Arabic’s alterations in cases the two disagree), with BBC Arabic’s omissions in red and additions in green:

“One mostly prays at home”, a source knowledgeable of the city’s Jewish community, who also chose to remain anonymous, told AFP.

Jews also suffer “when they deal with government bodies, they will not be well received once it is known they are Jewish”, he added.

Prayers for those followers of the Jewish religion who remained in Iraq are mostly held at home.

According to Edwin Shuker, a Jew born in Iraq in 1955 and left it for Britain when he was 16, “there are only four Jews with Iraqi nationality who are descendant of Jewish parents” left in the country., not including the Kurdish region.

In the early 1940s, the Jews were subject to a pogrom known as the “Farhud”, which left more than a hundred of them dead, properties looted and homes destroyed.

Throughout Iraqi history, Jews consisted a key part of the country’s diverse religious and social fabric.

In 1948, Israel was created amid a war with an Arab military coalition that included Iraq. Subsequently, almost all of Iraq’s 150,000 Jews left the country, involuntarily at large.

After Israel’s establishment, the number of Jews in the country exceeded 150,000. Then it began to decrease, as their identity cards were taken away and replaced by documents for Jewish people only that made them targets wherever they showed them, according to AFP.

The majority then preferred to sign documents saying they would “voluntarily” leave and renounce their nationality and property.

By 1951, 96% of the community had left. Almost all the rest were to follow when emigration rates resurged, after the 1969 public hangings of mostly Jewish merchants denounced as “Israeli spies”, together with the Ba’ath party rising to power by a coup.

“Promotion of Zionism” is punishable by death and that legislation has remained unchanged.

Decades of conflict and instability — with the 1980s Iran-Iraq war, the invasion of Kuwait, an international embargo, the 2003 American invasion and the ensuing violence — completed the erosion of the small community. By the end of 2009, only eight members remained, according to a US diplomatic cable.

[Nevertheless,] violence against members of the community has been persisting. A jeweler threatened by militiamen who coveted his goldsmith’s work went into exile.

In short, BBC Arabic saw fit to edit out the following information from a report about Iraqi Jews and their history:

On the other hand, BBC Arabic added an “according to AFP” disclaimer in the one section discussing the 1950s state persecution against Jews.

Additionally, BBC Arabic emphasized that the number of Iraqi Jews started to decrease only after Israel was already in existence, having been “a key part of the country’s diverse religious and social fabric” just shortly before. Thus, the BBC misleads readers unfamiliar with the Jewish experience in Iraq between 1941-1949 (again, mentions of the Farhud and Iraq’s participation in the 1948 war were left out of the report), creating the impression that Jews only began to be persecuted later on.

This is not the first time that BBC Arabic has removed details unflattering to the way Arab governments and Muslim majorities have historically treated Jewish minorities. In November 2019 it was the history of Syrian Jews which received similar treatment; BBC Arabic editors then left the infamous 1840 Damascus blood libel, as well as the 1947 Aleppo pogrom and the 1949 Damascus synagogue bombing, out of a timeline they claimed to have accurately quoted from the website of San Francisco-based NGO “JIMENA”.

Like Loading...
Tags from the story
AFP, AFP Arabic, BBC, BBC Arabic, CAMERA-Arabic, Farhud, Iraq, Jews from Arab Lands
Written By
Hadar Sela
More from Hadar Sela
The entry for the year 1973 in the backgrounder titled “A History...
Read More