On April 9th editors of the BBC News website’s ‘Middle East’ page chose to frame Israel’s response to the International Criminal Court as a “snub”.

The report itself carries the more temperate headline “Israel ‘will not co-operate’ with ICC war crimes investigation”. Interestingly, only in the seventeenth paragraph (of twenty-one) are BBC audiences informed that “Israel is not a member of the ICC”.

“Last month, [ICC Chief Prosecutor] Ms Bensouda announced that the court would proceed and investigate possible crimes committed by both Israelis and Palestinians in the West Bank, Gaza and East Jerusalem since 13 June 2014.

The date – elected by the Palestinians – marks an Israeli operation against Palestinian militants and an intensification of violence which led to a 50-day war in July and August.”

In the past we have repeatedly noted the BBC’s failure to clarify to its audiences the significance of the start date of the ICC investigation:

Those who bothered to read down to the eighteenth paragraph of this latest report found the following:

“Israel also points out that the start date for probing alleged crimes excludes the kidnap and murder by Palestinian Hamas militants of three Israeli teenagers the previous day, which triggered the Israeli operation.” 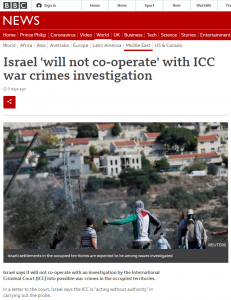 In fact – as we have also repeatedly noted in the past – Operation Protective Edge was brought about by hundreds of missiles launched from the Gaza Strip at civilian targets in Israel between the date of the kidnappings – June 12th 2014 – and the commencement of Operation Protective Edge on July 8th. It was that surge in missile fire which was the reason for Israel’s military action in the Gaza Strip, with the later discovery of dozens of cross-border tunnels prompting the subsequent ground operation. However – since 2014 the BBC has persisted in erasing that missile fire from the record, with the result that seven years on, it is incapable of providing audiences with a clear and accurate account of events.

Another example of inaccuracy that is the product of the BBC’s own framing is seen in the following paragraph:

“The case is expected to focus on three main areas: the Israel-Gaza war of 2014; violence along the Israel-Gaza border in 2018 amid Palestinian demonstrations backing the declared right of Palestinian refugees to return to ancestral homes in what is now Israel; and Israeli settlements in the occupied territories, considered illegal under international law – a point disputed by Israel.” [emphasis added]

That highlighted passage of course refers to the so-called ‘Great Return March’ which, then as now, the BBC chose to portray as some sort of spontaneous protest rather than an operation organised by terror organisations.

“At least 2,251 Palestinians dead, including more than 1,462 civilians, according to the UN, and 11,231 others injured. On the Israeli side, 67 soldiers and six civilians were killed, with scores more wounded.”

The BBC failed to carry out any independent verification of the ratios of Palestinian civilian/combatant deaths both during and after that 2014 conflict. The “UN” statistics once again promoted in this latest article are in fact sourced from a controversial report commissioned by the UN Human Rights Council more than a month before the conflict ended. That report relied on debatable data supplied by Hamas and NGOs involved in ‘lawfare’ campaigning against Israel.

This article is a prime example of the way in which past BBC editorial decisions concerning the framing of topics continues to impact the accuracy and impartiality of reporting on a different news story in the present.