In the week following the April 11th incident at the Natanz nuclear facility in Iran the BBC News website published no fewer than eight written reports. 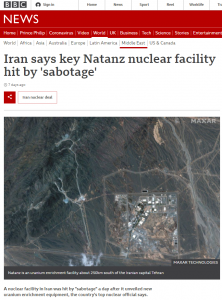 Themes often seen in previous BBC reporting on the Iranian nuclear programme re-appear in those articles. 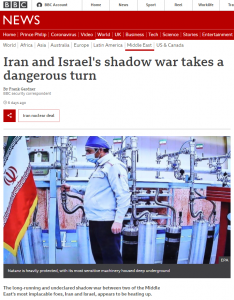 Frank Gardner’s article includes a previously seen map titled “changes agreed under Iran deal to limit nuclear programme” which describes the Fordo site as being “converted from fuel enrichment to technology centre” despite the fact that Iran did not comply with that requirement.

The majority of the BBC’s latest reports promote the often-seen mantra of a ‘peaceful’ Iranian nuclear programme.

“Iran, which insists it does not want nuclear weapons…” (article 1)

“Iran, which insists it does not want nuclear weapons…” (article 2) 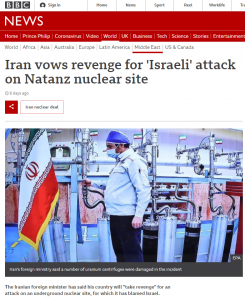 “Israel does not believe Iran’s repeated assertions that its nuclear programme is a purely peaceful civil one.” (article 4)

“Iran says its centrifuges are enriching uranium only to levels of purity usable for civilian purposes, such as nuclear fuel, agriculture or medicine.”

“Iran, which insists it does not want nuclear weapons…” (article 5)

“…Iran announced that as of Wednesday it would increase its enrichment of uranium to a significantly higher level of 60% purity – a step closer to the 90% needed for a nuclear bomb, something Iran says it is not seeking.” (article 6)

“Mr Rouhani warned the perpetrators that enrichment would now be ramped up as a response to “your wickedness”. 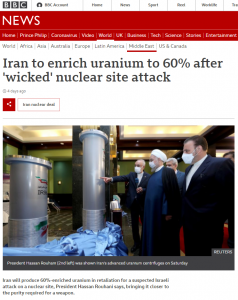 But he reiterated that Iran’s nuclear activities were “exclusively peaceful”.” (article 7)

“The agreement is designed to prevent Iran developing a nuclear weapon, something it denies wanting to do.” (article 8)

No effort was made to inform readers of these reports that – as the BBC knows – in December 2015 (after the JCPOA had already been agreed) the International Atomic Energy Agency – IAEA – produced a report which stated that:

“…the agency “assesses that a range of activities relevant to the development of a nuclear explosive device were conducted in Iran prior to the end of 2003 as a coordinated effort, and some activities took place” up to 2009.”

The BBC also knows that in April 2018 Israel revealed documents from Iran’s nuclear archive which raised new issues and that Iran has refused to grant IAEA inspectors access to sites of interest.

Also notable – and predictable – is the fact that despite there being no concrete evidence to date concerning responsibility for the incident, all the BBC News website’s coverage of this story steers audiences towards one sole explanation which is currently based entirely on other media organisations’ reports quoting anonymous sources.

In Frank Gardner’s article, for example, readers are told of media reports “quoting officials” but are not informed that those “officials” were not identified:

“Israel has not publicly said it was behind what Iran calls “an act of sabotage” but US and Israeli media reports are quoting officials as saying it was carried out by Israel’s overseas intelligence agency, Mossad.”

In the seventh report readers are told that:

“Israel, which sees Iran’s nuclear programme as a potential threat to its existence and is critical of Joe Biden’s efforts to revive the deal, has neither confirmed nor denied involvement in the Natanz incident. But public radio cited intelligence sources as saying it was a cyber operation by Mossad, Israel’s overseas intelligence agency.”

Whether or not such assumptions have any basis remains to be seen but it is certainly notable that the BBC is prepared to base its once again extensive reporting entirely on second hand claims from anonymous sources which it has obviously not independently verified and without any explanation of what the interests of such sources may be.

Another theme promoted in some of the BBC’s reports is amplification of third-party claims that the incident at Natanz was an Israeli effort to hamper the talks concerning a possible US re-joining of the JCPOA. 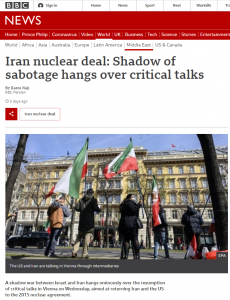 “To try to break this deadlock, negotiators from several countries are meeting in Vienna. But Israel doesn’t believe the nuclear deal is worth reviving in its current form. Dr Michael Stephens, a Middle East analyst with the London thinktank Royal United Services Institute (RUSI), says recent Israeli actions are a deliberate attempt to sabotage the nuclear negotiations.”

“Mr Rouhani said those responsible wanted to derail the indirect talks between US and Iranian officials in Vienna which are aimed at reviving the nuclear deal, formally known as the Joint Comprehensive Plan of Action (JCPOA).”

Although the BBC cannot of course provide any verifiable back-up to support those speculations, the fact that it published them provides a clear view of the narrative it seeks to promote.