A photo collection in the Guardian (“Human Rights this Fortnight in Pictures: a round-up of the coverage on struggles for human rights and freedoms, from Mexico to China”, April 10) included this: 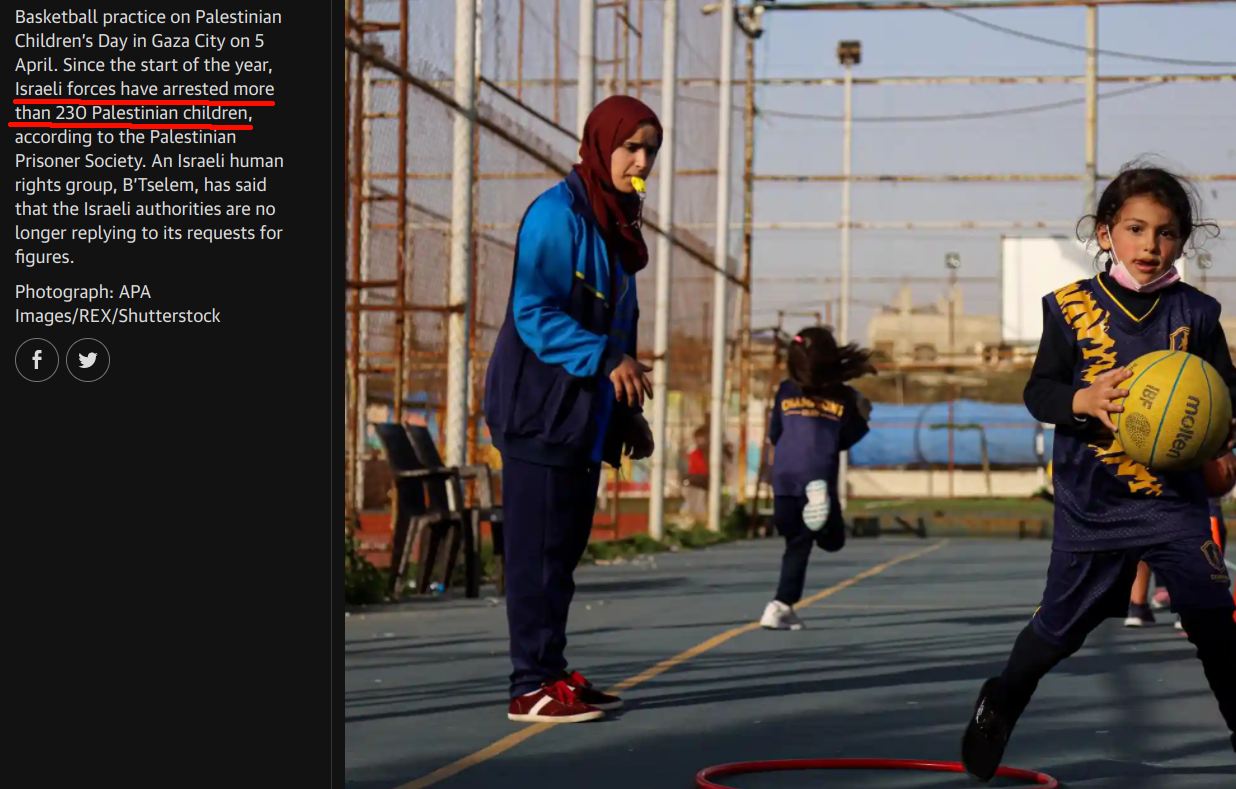 The caption next to the photo a young girl in Gaza reads:

Basketball practice on Palestinian Children’s Day in Gaza City on 5 April. Since the start of the year, Israeli forces have arrested more than 230 Palestinian children, according to the Palestinian Prisoner Society. An Israeli human rights group, B’Tselem, has said that the Israeli authorities are no longer replying to its requests for figures.

These figures on Palestinian children allegedly arrested by Israeli security forces were released around the time of Palestinian Prisoners’ Day, which anti-Israel NGOs like Adalah characterises as an annual day to “raise awareness of the Palestinian political prisoners [sic] and to the human rights violations to which are they subjected”.

However, we were unable to find any information confirming the existence of the PPS report cited in the caption.  It looks like the website of Palestinian Prisoners Society (PPS) hasn’t been updated in years and has no such report, and we were unable to find their presence on social media.  Moreover, quotes or figures purportedly by PPS seem generally only cited on the websites of other anti-Israel propaganda sites, such as the website of the PLO , PressTV and the Tehran Times, none of which link to the original report – if one exists.

It’s also telling that the Guardian caption informs readers that the group B’Tselem concedes that Israel is “no longer replying to its request for figures”, possibly suggesting that editors reached out to the anti-Israel NGO to check PPS’s numbers, but they were unable to corroborate them. If Israeli authorities no longer provide a well-funded and highly visible NGO like B’Tselem with such stats, it seems extremely unlikely that Jerusalem would provide them to such an opaque organisation like PPS.

It’s also revealing that Senior Fatah official Qaddura Fares is often cited in mainstream news reports as the director of the “Palestinian Prisoners Society (sometimes referred to the Palestinian Prisoners’ Club), which further undermines any notion that PPS is an independent, serious NGO, one that should be cited by reputable news outlets.

Even if the report does exist, there are so many unanswered questions, such as: what are the ages of the Palestinian ‘children’ arrested?  The Guardian photo depicts a girl who appears to be 6 or 7.  However, B’Tselem’s statistics on Palestinian children currently in Israeli prison (not merely “arrested” or “detained”, but currently in jail for security offenses) shows that the overwhelming majority are between 16 and 18 years old, with only one child under 14 in 2020.

Whilst we don’t know the age breakdown for those arrested in the first three months of 2021, if they correspond with B’Tselem’s figures for those in prison, then the photo used by the Guardian is extraordinarily misleading – conveying the erroneous message that a large number of Palestinians of grade school age have been arrested.

To get a broader look at the dilemma posed by the Guardian’s unsubstantiated claim about arrested Palestinian children, we contacted Maurice Hirsh, Head of Legal Strategies at Palestinian Media Watch and former Head of the IDF Military Prosecution, who said the following:

From personal experience, as the Head of the IDF Military Prosecution (2013 -2017) the numbers Palestinian NGO’s use regarding the arrest of Palestinians in general, and Palestinian minors in particular are simply invented. They are never based on official IDF, Israel Prison Service or Israeli Police numbers, but rather on whatever narrative the reporting organization wants to create. On numerous occasions I was presented with sundry statistics circulated by Palestinian NGOs that had no connection whatsoever to reality. In some cases, the statistics were outrageously low, while on others they were outrageously high. Cherry picking the statistics of one of these NGO’s, without first establishing the methodology used for gathering the statistics and verifying that they come from an official source is simply negligent.”

We’ve reached out to the Guardian Readers’ Editor and asked if they actually saw the report in question by PPS, and, if so, if editors fact-checked it to determine if their statistics were gathered using reliable sources and sound methodology.