A nine-minute-long item aired on April 20th on BBC Two’s ‘Newsnight’ programme supposedly related to the topic of a visit to Israel by a British cabinet minister in order to learn about Israel’s ‘Green Pass’ system and discuss the possibility of opening a travel corridor between the two countries.

Presenter Emily Maitlis began her introduction to that item (available in the UK from 35:01 here) as follows: [emphasis in italics in the original, emphasis in bold added] 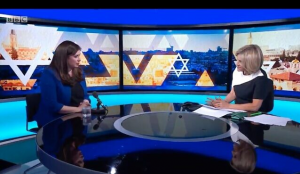 Maitlis: “Would a Covid vaccine passport liberate a nation or divide it? One of the toughest questions to answer for each country right now. And this week government representatives are in Jerusalem to look at what the country who has led the way in vaccination is doing there. The Green Pass is an App that could soon provide a model for vaccine passports here.”

The BBC’s domestic audiences however learned nothing about how Israel’s Green Pass works because Maitlis and her team had more pressing topics to promote.

Maitlis: “But in Israel, where the Palestinian population has not been inoculated at anywhere near the rate of the Israeli population, there is plenty of concern about the passport’s ability to widen the gulf.”

Maitlis did not clarify what she meant by “the Palestinian population” but if she was referring to Israeli Arabs – as her use of the words “in Israel” would suggest – the claim that that sector “has not been inoculated at anywhere near the rate of the Israeli population” is inaccurate and misleading. All sectors of the Israeli population over the age of 16 have been offered the vaccine equally and while uptake was initially lower in some sectors – including among Israeli Arabs – the rates have recently improved.

If instead by “the Palestinian population” Maitlis meant people living in Palestinian Authority controlled areas and the Gaza Strip, then clearly her use of the term “in Israel” is equally inaccurate and misleading. She continued:

Maitlis: “In a moment we’ll hear from Israel’s ambassador to the UK who’s giving her first broadcast interview to ‘Newsnight’. First, the background. Israel’s population is a boutique nine million. Nevertheless, their roll-out of the vaccine has been impressive. Nearly 60% have been fully vaccinated already. This weekend Israelis unmasked for the first time, stepping out on the streets without face coverings: a response to a successful mission to get the virus under control. The country has also re-opened all schools and universities. But the roll-out to Palestinian citizens has been much slower at 0.5% and that’s led to criticism that a passport scheme will widen a political divide already hurting many in that country.”

Maitlis then introduced the second part of her agenda: a topic which has nothing whatsoever to do with vaccinations or Green Passports.

Maitlis: “Last summer the Netanyahu government threatened [sic] to push ahead with the annexation of almost a third of the West Bank in a move which has drawn sharp criticism for being in breach of international law. Boris Johnson told the Commons his government had strongly objected to the plan and restated its support for the two-state solution. And Netanyahu’s minister for settlements at the time? Well she’s now Israel’s ambassador here: an appointment greeted with dismay and no small outrage from liberal British Jews, nearly two thousand of whom signed a petition to get the appointment revoked. They failed and Tzipi Hotovely took up her post here last autumn. She joins us now.”

Maitlis’ first question to her guest nodded to the item’s ostensible subject matter.

Maitlis: “Tell us how you think the Green Pass Covid passport is working in Israel because we have government representatives there now. All eyes are on your country to see if it’s functioning.”

Tzipi Hotovely spoke about cooperation between the health ministries in the two countries, Michael Gove’s visit and the possibility of travel between Britain and Israel, pointing out that the majority of Israeli adults have been vaccinated against Covid 19.

Maitlis: “The majority of adults in Israel, but many Palestinians right on your doorstep are not. There is a concern that it has exacerbated already existing inequalities between communities that are vaccinated and those that aren’t. In Israel that divide is profound.”

Once again Maitlis’ use of the term “in Israel” apparently to describe Palestinians who live under PA or Hamas rule is inaccurate and confusing to viewers.

Hotovely explained that the Palestinian Authority (which is also responsible for healthcare in the Gaza Strip under the terms of the Oslo Accords) has its own vaccination programme and that Israel has provided help when that was requested by the PA.

Maitlis: “OK. You know, I’m sure, that six Israeli and Palestinian human rights organisations have petitioned the High Court saying that not only is it epidemiologically unsound, but that Israel carries a legal, moral and ethical obligation to ensure that Palestinians receive vaccinations.”

As has been so often the case in BBC amplification of claims made by assorted political NGOs concerning vaccinations throughout the past four months, Maitlis made no effort to inform viewers of the names, political agendas and funding of those six “human rights organisations” – Physicians for Human Rights Israel, HaMoked, Al Mezan, Gisha, Adalah and Rabbis for Human Rights. 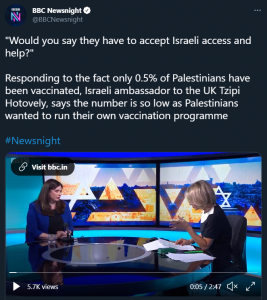 After Hotovely had twice explained – with interruption from Maitlis – that the PA has its own vaccination programme which includes the Russian vaccine and others supplied by the WHO, Maitlis contined:

As Hotovely once more tried to explain that the PA has its own vaccination programme, Maitlis interrupted:

Maitlis: “Legal, moral, ethical obligation: that was what you were being petitioned for.”

Maitlis then concocted some decidedly flimsy linkage between that question and her next talking point:

Maitlis: “I ask because your appointment has been pretty controversial as ambassador to the UK. You’ve described yourself I think in the past as a religious right-winger and your appointment was met with a lot of concern amongst liberal Jews who campaigned and petitioned to have you removed because of remarks that you had made about settlements in the past. What would you say to that?”

Hotovely replied that she has been welcomed by British Jews and has met with different groups within the community before Maitlis moved on to her next talking point.

Maitlis: “There was concern – wasn’t there? – on the part of our government – Boris Johnson’s government – with the proposed annexation of the occupied territories by Benjamin Netanyahu. Is that still going ahead? We know it’s paused for now but is that still government policy and do you believe in a two-state solution?”

Viewers were not informed that the proposal was to apply Israeli civil law to parts of Area C rather than “the occupied territories” as a whole or that it came within the framework of the then US Administration’s ‘Peace to Prosperity’ proposal, under which the PA would gain territory as part of a two-state solution. 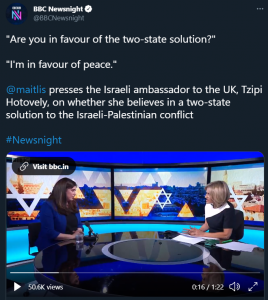 Hotovely spoke of the importance of the Abraham Accords while Maitlis repeatedly interrupted her to ask “are you in favour of the two-state solution?”. As Hotovely pointed out that the Palestinian Authority is currently not interested in negotiations, Maitlis brought the interview to a close.

Clearly Ambassador Hotovely’s views concerning the two-state solution and her reception by some sectors of the Jewish community in the UK have nothing at all to do with the topic of the Green Pass and the British government minister’s related visit to Israel. But rather than inform domestic audiences about how the kind of scheme that their own government may adopt works in practice, Maitlis and her ‘Newsnight’ team elected to focus on those unrelated issues and to amplify a politically motivated narrative concerning vaccinations for Palestinians that BBC audiences have seen promoted relentlessly since the beginning of the year.