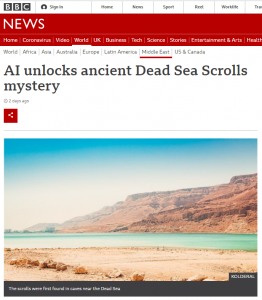 The scrolls, which include the oldest known version of the Bible, have been a source of fascination since their discovery some 70 years ago.

The first sets were found by a Bedouin in a cave at Qumran near the Dead Sea in what is now the Israeli-occupied West Bank.

They contain manuscripts, mostly written in Hebrew as well as Aramaic and Greek, and are believed to date from about the Third Century BC.” [emphasis added]

Particularly in light of the fact that at no point in the report are readers informed of the identity of the people who wrote the Dead Sea Scrolls, one must wonder why the BBC chose to describe Qumran as being “in what is now the Israeli-occupied West Bank” rather than, for example, ‘in what was at the time Mandate Palestine’ (as it was known when the first scrolls, including the one which is the topic of this report, were discovered) or simply ‘in the Judean Desert’.

The BBC’s framing of course erases from audience view the fact that Jordan invaded and occupied that part of the territory designated by the League of Nations for the establishment of a national home for the Jewish people and by means of the use of partial terminology – “Israeli-occupied” – the corporation’s preferred political narrative is inserted even into a report tagged “archaeology”.