Three months after Mahmoud Abbas issued a presidential decree ordering elections for the first time in fifteen years, the BBC finally got round to producing its first report on that topic on April 24th.

That perhaps explains why readers of the article by the BBC Jerusalem bureau’s Tom Bateman which appeared on the BBC News website’s ‘Middle East’ page – “Palestinian election: Leaders face reckoning as rare vote looms” – are wrongly told that: 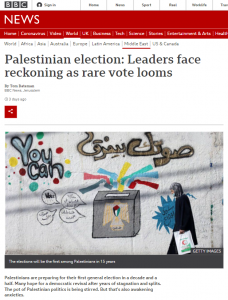 “The parliamentary and presidential polls were announced last year by the ageing Palestinian leader after days of talks with other parties in Cairo.” [emphasis added]

Bateman’s article opens with an interview with one of the contenders on Fatah’s list.

“It was the Middle East war of June 1967 and Israeli troops were about to capture East Jerusalem from Arab armies. Fighting had erupted outside her family home in the neighbourhood of Silwan.”

Predictably, Bateman’s account does not include the fact that Jordan had invaded and occupied the eastern part of Jerusalem 19 years earlier and no mention is made of the fact that the Israeli prime minister at the time sent a message to the Jordanian king stating that Israel would not engage in hostilities unless Jordan attacked first – which it did. Bateman continues with some standard BBC messaging:

“Israel later annexed the eastern half of the city, whose population is overwhelmingly Palestinian, in a move not recognised internationally. It remains in control to this day across what it sees as its undivided capital. Palestinians want East Jerusalem as the capital of their future state comprising the West Bank and Gaza Strip – territories also occupied by Israel in 1967.”

Under the sub-heading “Devastating splits”, readers find a debatable description of Fatah as “secular”.

“Few thought the elections would really happen given similar past promises and the unresolved, bitter rivalry between the two main factions – his secular Fatah movement, and their Islamist opponents Hamas.”

That section continues with the suggestion that Hamas terrorism is a matter of opinion rather than fact.

“A bloody conflict broke out between them in 2007 after Hamas unexpectedly won the last national vote. The fighting saw the armed movement take full control in the Gaza Strip. It was isolated by much of the international community which, like Israel, views it as a terrorist group.”

Under the sensational sub-heading “’Even our dreams are under control’”, Bateman recycles a theme he has often used in the past: the description of Palestinian Authority civil and military control in Area A and civil control in Area B as “limited self-governance”.

“For some in the West Bank, the poll amounts to a first flourish of democracy amid what they see as dual obstacles – living in areas of limited self-governance under an ossified Palestinian leadership within Israel’s military occupation.”

That section includes an interview with a Palestinian woman from Hebron.

“Many Palestinians feel the generation of Fatah leaders still in power – those behind hard-won international recognition in the 1990s – have failed to deliver. The breakthrough Oslo peace accords with Israel created the PA, but hopes it would lead to an independent state haven’t materialised.

Ms Jabari describes layers of power in a military occupation she cannot hold to account. Israel controls much Palestinian movement in the West Bank – it says for its security. Ms Jabari says it leaves her feeling “shackled”.

“Even our dreams are under control. I dream every day to go to the beach. You cannot see it, not even feel it or touch it,” she says.”

Bateman does not bother to clarify the role of the Palestinian initiated second Intifada in explaining why “hopes” that the Oslo Accords “would lead to an independent state” did not transpire.

Only in section five of the article do readers find any information about some of the 36 lists running in the PLC election scheduled for May 22nd.

“Fatah’s decades-old family feud has spilled back into the open. In the run-up to the poll, Mr Abbas’ officials have lobbied hard to stop a split, but failed. The movement is effectively running as three different factions – or candidate “lists”.

One rival is the breakaway Future list backed by Mohammed Dahlan, a former Fatah security chief living in exile in the UAE. Mr Abbas expelled him in 2011, accusing him of a coup attempt and raising unsubstantiated claims he had a hand in Yasser Arafat’s death.

But the major challenge to Mr Abbas’ authority comes from the jailed Palestinian leader Marwan Barghouti, a popular Fatah reformist who was convicted by Israel on five counts of murder in 2004 during the second Palestinian Intifada, or uprising.”

Bateman does not bother to clarify what exactly he believes Barghouti aspires to ‘reform’. Neither are BBC audiences informed that Nasser al-Qudwa was expelled from Fatah in March by Mahmoud Abbas.

“Polls suggest Mr Barghouti would comfortably beat Mr Abbas in a head-to-head race, and he is expected to run from his prison cell in the presidential poll slated for 31 July.

He is backing a new list – Al-Hurriya, or Freedom – for the parliamentary vote. His wife, lawyer Fadwa Barghouti, is a candidate along with Nasser al-Qudwa, a veteran diplomat and the nephew of Yasser Arafat who calls for an end to corruption in the PA.

“Nobody can deny that a huge number of people are disgruntled, are angry. They hate what they see and they will not elect Hamas nor Fatah,” says Mr al-Qudwa, arguing his group offers a “chance to deliver”.

He says his split from the official Fatah list was “not planned”, but followed rows over how to handle Hamas. He thinks Fatah’s rivals gained too much from the deal to hold elections without a clear pledge to return control of Gaza to the “political and administrative Palestinian system” – ie, to the PA.”

Bateman has no comment to make on the issue of Barghouti and other convicted terrorists running for office or the fact that two of the parties competing in the PLC election are designated by both the United States and the European Union as terror organisations.

In a sub-section titled “’Big zero’ for the West” Bateman writes:

“The enmity between Fatah and Hamas is the recurrent issue that has paralysed Palestinian politics.

Mr Abbas says there can be only “one authority, one law, one gun” – a rejection of separate militant factions. But Hamas holds onto its weapons, promoting itself to its followers as the effective “armed resistance” to Israeli occupation. Much of the global community conditions dealing with Hamas on it recognising Israel, renouncing violence and signing up to previous Palestinian agreements made internationally.”

Bateman does not however inform readers that no fewer than eleven of the lists registered to run in the May 22nd PLC election – including Abbas’ ‘Fatah’ and Dahlan’s ‘Future’ – have logos which, far from “recognising Israel” and respecting previous agreements, use images which present Israel as ‘Palestine’.

He does however promote a terror group’s talking points – without clarifying that Hamas rejects the concept of a two-state solution.

“…like in 2006, any newly elected Palestinian government including Hamas could be abandoned by its Western donors. The group itself accuses countries of abandoning Palestinians’ democratic choices.

“After 15 years it is clear [the West] has failed, an absolute failure, to kick Hamas out of the political theatre. Hamas is still there representing a good majority of the Palestinian people,” says senior Hamas official Basem Naim. “On the other hand [those countries] have failed to achieve anything politically with the Israelis… [towards a] two state solution.

Bateman goes on to provide one sole explanation for “the dire humanitarian situation” in the territory from which, just the night before his article was published, no fewer than 36 missiles costing hundreds of dollars each were launched at Israeli civilians. Hamas’ additional prioritisation of terror projects such as tunnels that cost millions of dollars to construct is likewise erased from the picture by the BBC’s Middle East correspondent.

“But analysts believe Hamas may fare worse than before, plagued by discontent over its running of Gaza. The dire humanitarian situation stems largely from Israel’s land, sea and air blockade – coupled with border closures also imposed by neighbouring Egypt. Israel says it is to stop weapons reaching the group, which has fought repeated rounds of conflict with it.”

In the final section of his report – titled “Frying the omelette” – Bateman turns to a topic which has been under discussion ever since Abbas issued his presidential order for elections: their possible cancellation.

Bateman did not inform readers that four days before the publication of his article, the Palestinian Central Elections Commission had commented on that topic:

“Most Palestinians in East Jerusalem will be able to vote in the upcoming Palestinian elections regardless of whether Israel allows voting to take place inside the city, the Palestinian Central Elections Commission said on Monday.

According to the commission, around 150,000 residents will be able to vote in what Palestinians call the “Jerusalem suburbs” — towns and villages that ring the capital. Israel defines these areas as lying in the West Bank, while the Palestinian Authority see them as part of its “Jerusalem Governorate.”

Neither were readers told about the PA’s rejection of proposals for digital voting.

While Abbas certainly seems to be setting the scene for the postponement or cancellation of elections (using Israel as a scapegoat), Bateman offered nothing in the way of analysis of the likely outcomes of such a move to BBC audiences.

BBC AUDIENCES STILL IN THE DARK ON DOMESTIC PALESTINIAN POLITICS