As commentator Noah Rothman observed, when reporters are compelled by necessity to report on subjects that cast their ideological side in a negative light, nothing is more welcome than a hyperbolic reaction quote from someone on the other side.

As such, a report by the Guardian on the antisemitism row involving Bristol University Sociology Professor David Miller (a former Guardian contributor) highlighted a sensationalist accusation against Miller and his university coming from one Conservative MP, whilst ignoring the sober, well-founded criticism by the Jewish community.

The April 27th article, that appears to be the first the Guardian has published on the row, which dates back many months, was written by Education reporter Rachel Hall and titled “Conservative MPs call Bristol University a ‘hotbed of antisemitism’”.

Conservative MPs have attacked the University of Bristol for being a “hotbed of antisemitism” and fostering a climate similar to “1930s Nazi Germany” over its failure to swiftly address accusations that a professor used offensive tropes.

No serious observer of the antisemitism accusations at Bristol University would compare the situation to that of Nazi Germany, and Hall’s decision to open with such hyperbole – attributed, again, to one MP – serves to diminish the seriousness of the charges against Miller – a pattern seen throughout her report.

The university is investigating David Miller, professor of political sociology, after allegations that he criticised Israel for wanting to “impose its will over the world” and said some Jewish students were being used as “political pawns by a violent, racist foreign regime”.

However, there are more damning examples of Miller’s antisemitism that the Guardian reporter omitted.

Miller, who’s reportedly being investigated by the police regarding some of his racist comments towards Jews, can be seen here complaining of global Zionist conspiracy.

This is Soviet antisemitism, the assertion that there's a global Zionist conspiracy against the left pic.twitter.com/jgjKILAJoj

His conspiratorial thinking expressed itself again, following criticism of those comments, in alleging that attacks on him are “directed by the State of Israel”.

Such antisemitic theories have in fact been used in Miller’s own teaching.  Here’s his power point slide from a lecture on Islamophobia, titled “Harms of the Powerful”, which accuses most of the Jewish community of conspiring – at the behest of Israel – to promote racism against Muslims: 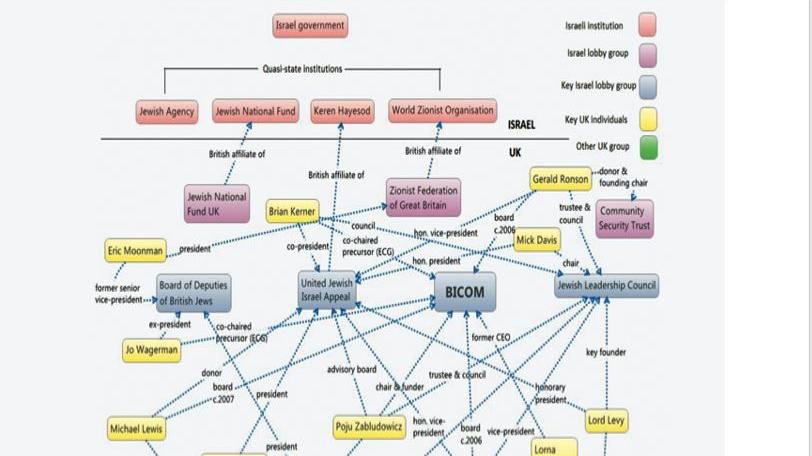 In the penultimate paragraph of the Guardian article, readers learn of the support for Professor Miller:

An open letter to the university from the Support David Miller campaign has been signed by hundreds of public intellectuals and academics, including high profile names such as Noam Chomsky. The letter states: “Professor Miller is an eminent scholar. He is known internationally for exposing the role that powerful actors and well-resourced, co-ordinated networks play in manipulating and stage-managing public debates, including on racism.”

However, the Guardian reporter entirely omits criticism of Miller by most of the organised Jewish community – including the CST, Board of Deputies, Holocaust Educational Trust, and Union of Jewish Students (UJS).  Many non-Jewish activists and leaders have similarly condemned Miller, such as Nick Lowles, chairman of the anti-extremist group Hope Not Hate.

Further, more than 100 MPs and peers – from every major political party – sent a letter to Professor Hugh Brady, head of the university, demanding action against Miller in light of his racist attacks on Jewish students.

The fact that the Guardian ignored the row at Bristol University involving Miller’s antisemitism for months, and then, when finally covering it, framed it as a Tory attack on the professor, is just another example of the media outlet’s institutional failure to take anti-Jewish racism seriously when the racists are on the left.