A number of social media users have flagged up an episode of the BBC One general knowledge quiz show ‘Pointless Celebrities’ aired on May 1st. 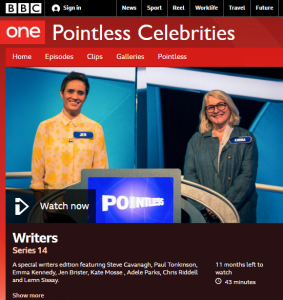 Explaining why the correct answer to one of the questions was ‘scallion’, co-presenter Richard Osman stated:

“It comes from a Palestinian port of Ascalon. Originally onions from Ascalon.”

Ascalon – or as it is known today, Ashkelon – is of course a coastal city in southern Israel. While the seaport had many different rulers throughout its history – including Canaanites, Philistines, Greeks, Romans and Crusaders – it is not and never was “Palestinian” in the sense that the majority of viewers would understand.

Seeing as the programme will remain available on BBC iPlayer for the next eleven months, a clarification is obviously in order.

BBC WS RADIO PROMOTES THE CLAIM THAT JESUS WAS ‘PALESTINIAN’