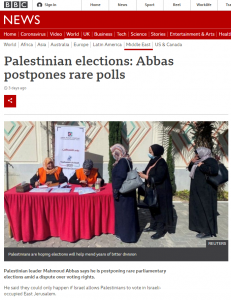 “…under a previous agreement with Israel governing Palestinian voting rights in the city, only up to 6,300 could vote there in Israeli-designated post offices. In the last election, the remainder were allowed to cast their vote so long as it was outside the city boundaries.” [emphasis added]

CAMERA UK submitted a complaint pointing out that Article IV of Annex II of that “previous agreement” – the 1995 Israeli-Palestinian Interim Agreement (Oslo II) – shows that rather than being “Israeli-designated”, those post offices were in fact specifically named in the agreement signed by the PLO. We also pointed out that the number 6,300 does not appear in that agreement and that the Oslo Accords relate to elections for Palestinian Authority institutions whereas Abbas’ presidential decree ordering the 2021 elections was issued two days after his initiation of a change to the law “stating that this is no longer an election for the Palestinian Authority but for the State of Palestine, that is, for the President and the Legislative Council of the State of Palestine”.

On May 7th we received a response in which we learn that the BBC considers misrepresentation of part of the Oslo Accords “a technicality”.

“Thank you for getting in touch about our article Palestinian elections: Abbas postpones rare polls.

After considering your first point we have amended this line in the story to remove a description of these post offices as “Israeli-designated”.
We consider this a technicality which doesn’t warrant a note of acknowledgement.

On your second point, we don’t agree that this is a material omission or raises any issues around the accuracy or impartiality of the article.
Thank you once again for getting in touch.”

The report was amended on May 8th and the relevant paragraph now reads:

“However, a previous agreement with Israel governing Palestinian voting rights in the city meant only up to 6,300 could vote there in half a dozen designated post offices. In the last election, the remainder were allowed to cast their vote so long as it was outside the city boundaries.”