Previously we addressed a BBC News website report titled “Jerusalem violence: More clashes ahead of nationalist march” which appeared on the morning of May 10th.

As the day went on that article was updated numerous times to reflect events and roughly half an hour after the Hamas rocket attacks on Jerusalem and surrounding areas, its headline was changed to “Jerusalem violence: Rockets fired from Gaza after major clashes”.

The latest version of that article (the one which will remain online as “permanent public record”) is titled “Jerusalem violence: Deadly air strikes hit Gaza after rocket attacks” and it includes several points worthy of note. [emphasis in bold added] 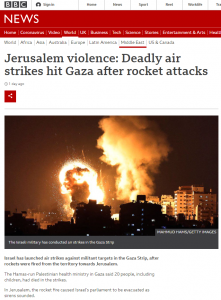 The sole reference to what happened in Jerusalem as a result of those rocket attacks is as follows:

“In Jerusalem, the rocket fire caused Israel’s parliament to be evacuated as sirens sounded.”

In fact only the Knesset plenum was evacuated and those present took shelter in designated areas in the building. BBC audiences learn nothing of damage to houses in Mevasseret Zion and Beit Nekofa and no mention is made of a concurrent PIJ attack using an anti-tank missile on a car near the border with the Gaza Strip in which a civilian was injured.

As was the case in earlier BBC reporting, Jerusalem Day is presented as celebrating the “capture” of parts of the city occupied by Jordan between 1948 and 1967 – which goes unmentioned by the BBC – rather than its reunification and presented as “a deliberate provocation”.

“The Jerusalem Day event marks Israel’s capture of East Jerusalem – home to the Old City and its holy sites – in 1967, and usually sees hundreds of flag-waving Israeli youth make their way through the Muslim Quarter via Damascus Gate, chanting and singing patriotic songs.

It is regarded by many Palestinians as a deliberate provocation. This year’s march would also have taken place in the final days of the Islamic holy month of Ramadan.”

The article, together with ‘analysis’ from the Jerusalem bureau’s Tom Bateman, refers to “possible” and “threatened” evictions “by Jewish settlers”.

“The latest violence follows days of clashes between Palestinians and Israeli police in the nearby Sheikh Jarrah district of East Jerusalem, with the possible eviction of Palestinian families from their homes there by Jewish settlers a focal point for Palestinian anger.”

“The city’s surging tensions stem from several causes. Among them, the threatened eviction of several Palestinians families from their homes in East Jerusalem by Jewish settlers.”

If those evictions do take place in the future, it would of course be the Israeli police and enforcement authorities that would carry out court issued eviction orders rather than people the BBC chooses to brand “Jewish settlers”.

The article uncritically amplifies a statement from a Palestinian Authority source which inaccurately claims that Israeli police assaulted “worshippers”. The focus of police activity was actually violent rioters rather than people praying.

“The Israeli occupation forces’ brutal storming and assault on worshippers in the blessed al-Aqsa Mosque and its courtyards is a new challenge to the international community,” spokesman Nabil Abu Rudeineh said.”

“King Abdullah II of Jordan, which is the custodian of Jerusalem’s Islamic and Christian holy sites, condemned “Israeli violations and escalatory practices at the blessed al-Aqsa mosque”.

Jordan assumed custody of the sites when it occupied the West Bank and East Jerusalem in the 1948 Middle East war, and was allowed to continue the role after the areas fell to Israel in 1967.”

As has previously been noted on these pages, the 1994 peace treaty between Israel and Jordan only refers to Jordan’s “special role” for Muslim holy sites:

“Israel respects the present special role of the Hashemite Kingdom of Jordan in Muslim Holy shrines in Jerusalem. When negotiations on the permanent status will take place, Israel will give high priority to the Jordanian historic role in these shrines.”

In 2013 Jordan signed an agreement with the Palestinian Authority which refers to just one Christian sect in its preamble:

“Preamble, article IV: “Based on the role of the Sharif Hussein bin Ali as a protector and caretaker of the holy places in Jerusalem and their buildings since 1924 […] the guardianship over the holy places has reached [the hands of] His Majesty King Abdullah II bin Hussein, including the Greek Orthodox Patriarchate of Jerusalem, that is subject to Jordanian Law No.27 of the year 1958.”

The basis for the BBC’s claim that Jordan is the custodian of Christian sites in general in Jerusalem is therefore unclear.