On the morning of May 11th BBC World News TV reporter and presenter Mark Lobel urged his Twitter followers to watch a report he’d made about events in Israel and the Gaza Strip. 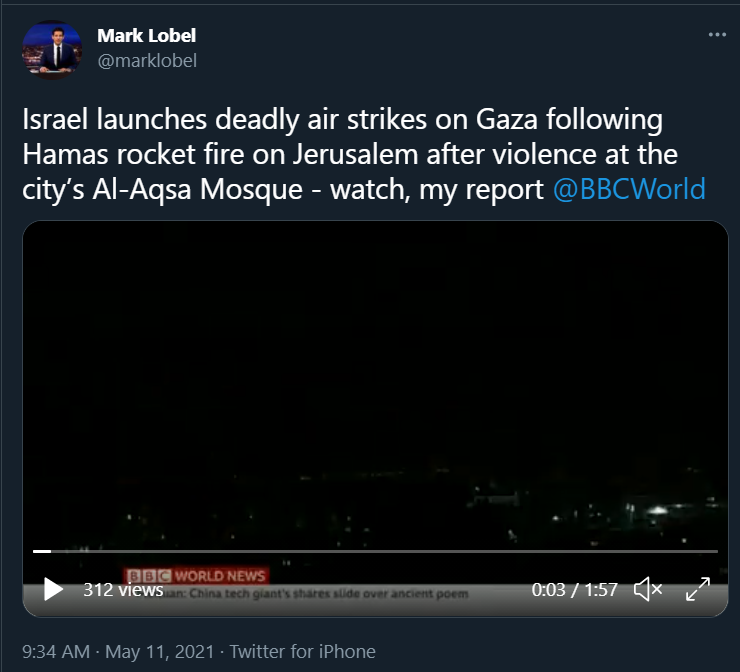 Let’s take a look at what television audiences worldwide (121 million people a week in 2019 according to the BBC) were told by Lobel. [emphasis in italics in the original, emphasis in bold added]

The report began in ‘last-first’ fashion with audiences unable to determine the sequence of events.

Lobel: “Overnight, airstrikes on Gaza and rockets launched from Gaza as hostilities continue.”

Without providing any explanation of Jerusalem Day and the annual flag parade to mark the reunification of the city after 19 years of Jordanian occupation – and without mentioning that it was re-routed – he continued:

Lobel: “On Monday Israeli hardliners gathered outside Jerusalem’s Old City with a march planned to go through the Muslim quarter as their holy month of fasting wraps up.”

He went on to amplify false claims of ‘restricted access’ and to conflate cause and effect by describing rock-throwing by Palestinian rioters as being “in return”.

Lobel: “Palestinians who planned to oppose it were met with rubber bullets, stun grenades and water cannons by the Israeli authorities in the al Aqsa mosque where they’d previously clashed with police. They say their access had been restricted. They threw rocks in return during one of Jerusalem’s worst periods of violence for years.”

Although viewers would not know it, Lobel then proceeded to describe over 150 rocket attacks on Jerusalem and the surrounding area as well as southern Israel as “several rockets”.

Lobel: “During the day, Palestinian militants in Gaza sent several rockets into Israel, causing alarm there.”

His portrayal of events in the Gaza Strip was notably less laconic.

Lobel: “The Israeli airstrikes on Gaza in response had brutal consequences. This grieving grandmother shouts ‘our blood is a cheap price for Jerusalem’. This mother must now imagine life without four children. There were other casualties too.”

Although no effort was made to clarify to which specific incident Lobel was referring, it could be the one in Beit Hanoun in which three children were killed, apparently by a shortfall rocket launched by one of the Gaza Strip terror factions.

Following an interview with former US ambassador Dennis Ross, Lobel breached the BBC News style guide by referring to Temple Mount as “the al Aqsa mosque compound” rather than Haram al-Sharif as stipulated. 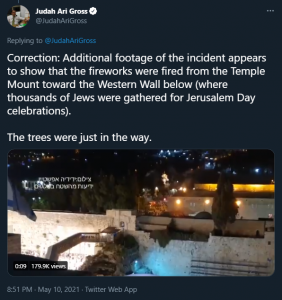 Lobel: “As the al Aqsa compound was ablaze, below Israelis were seen celebrating.”

Lobel made no effort to inform viewers that the fire in a tree (rather than the “compound”) seen on screen was caused by Palestinians launching fireworks towards the Western Wall.

Neither did he bother to clarify that what the Israelis below were celebrating was Jerusalem Day rather than – as could well be understood from his careless words – the fire above.