On May 13th the BBC News website posted a filmed ‘explainer’ titled “What is going on between Israel and the Palestinians?” on its ‘Middle East’ page together with a misleading synopsis. [emphasis in bold added, emphasis in italics in the original] 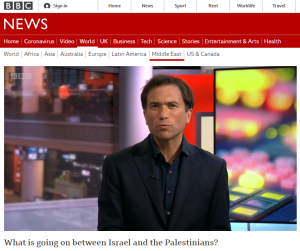 “Hamas militants have launched dozens of rockets at Israel after Israeli air strikes killed senior commanders and felled a multi-storey building in Gaza.

The escalation of the fighting, which began on Monday, has prompted the UN to warn of a “full-scale war”.

At least 65 people in Gaza, including 14 children, and seven people in Israel have been killed since then.

Ros Atkins looks at the recent events that triggered this latest violence between Palestinians and Israelis.”

Ros Atkins purported to provide six reasons for the recent escalation in hostilities.

“These tensions reach back decades. But why have they escalated now? Well, there are many reasons. Here are six.”

The first ‘reason’ promoted by Atkins presented a superficial account of the long-running Sheikh Jarrah property dispute which has been used by Palestinian factions to fuel tensions of late.

“The first concerns growing Palestinian protests. Some have been sparked by an imminent ruling on six Palestinian families who are threatened with eviction in the neighbourhhod of Sheikh Jarrah. It’s connected to a lawsuit brought by Israeli settlers and these protesters see that as part of a broader effort to drive them from East Jerusalem.”

Atkins made no effort to question that latter claim or to explain the history of the area and the long-running legal case.

There have also been Palestinian protests at Damascus Gate in Jerusalem’s Old City after police erected barricades. This was exacerbated by ultra-nationalist Israelis marching nearby.”

Atkins failed to mention that rioting continued even after those barricades were removed and the Tiktok videos of Arabs attacking Jews are absent from his account.

Atkins’ next point concerned “the calendar”.

“This year the end of Ramadan has coincided with several important dates for Israelis”.

He then brought in Isabel Kershner of the New York Times to give a partial portrayal of Jerusalem Day which obscures the fact that it marks the reunification of Jerusalem after 19 years of Jordanian occupation of some sections of the city.

Kershner: “That’s a day when mostly right-wing Israelis celebrate the conquest of East Jerusalem in the 1967 war. And they mark that usually with a flag parade that’s very provocative and goes right through the Muslim quarter of the Old City.”

Failing to clarify that the flag parade was this year rerouted in an attempt by Israel to lower tensions, Atkins continued:

“The next factor is politics. Israeli prime minister Benjamin Netanyahu is under pressure after the recent election. His rivals are now trying to form a new government. And Palestinian politics is also deeply divided. Hamas controls Gaza, Fatah controls the West Bank. Recent elections were postponed, much to Hamas frustration.”

No effort was made to inform viewers why two different Palestinian factions control separate areas or why those elections were postponed before Atkins went on to claim that the Abraham Accords are also a contributing factor because “Palestinians have felt marginalised” and then state:

“And so while neither Hamas or Mr Netanyahu would put it this way, a conflict could serve political purposes for both.”

Atkins then went on to give his account of “what happened in Jerusalem on Monday”: an account which does not include any mention of previous days of rioting at the same location or the pre-planned stockpiling of rocks and fireworks inside a holy building.

“Israeli police clashed with thousands of Palestinians in the compound of the al Aqsa mosque. Over 300 Palestinians and 20 police were injured. And this is all on a site which is hugely sensitive. It’s sacred to Jews and Muslims. Afterwards, Israel blamed extremists. Palestinian leaders called it brutal and the UN said this:”

Viewers were given no information concerning the notoriously anti-Israel record of the UN commission of human rights before they saw its spokesman claim that Israel’s response to the violent rioting appeared “unwarranted, disproportionate or indiscriminate”.

Erasing previous rocket fire, arson attacks, night rioting along the Gaza Strip border and Hamas incitement to violence from audience view, Atkins then claimed that it was solely the events of May 10th on Temple Mount which brought Hamas into the picture.

“Hamas in Gaza was watching these events. Our fifth factor was its decision to act. On Monday, around 6 p.m. it began firing rockets. Israel swiftly launched multiple strikes in return. And this has continued. Hundreds of Hamas rockets, hundreds of Israeli airstrikes. Hamas and Israel’s long-time animosity is playing out once more.”

Atkins’ sixth factor promoted the notion of equivalence between a statement from Israel’s prime minister speaking about defending citizens from attacks by terrorist organisations and a statement from a Hamas leader located in Qatar.

“Language like that makes escalation more likely. Put all of that together and we start to explain the situation. But let’s be clear – underneath recent events remains the long-term failure of Israel, the Palestinians and the world to find a lasting peace. And that failure explains what we are seeing now and why we’ll see it again.”

Atkins made no attempt to explain to viewers exactly how he thinks “a lasting peace” can be found while Palestinians continue to be split into multiple factions including terrorist organisations such as Hamas and Islamic Jihad which reject Israel’s very existence.

Crucially, the word terrorism did not appear even once in Atkins’ simplistic ‘explanation’. Atkins did however promote equivalence between a democratic country trying to protect its civilians from murderous attacks and a terrorist organisation which uses the civilians in the territory it took over by force as human shields while attacking Israeli civilians to try to advance its ideology of eradicating their country from the map.

That, of course, is a topic that the BBC has long avoided explaining accurately and impartially to its audiences worldwide and as we see, continues to do so.