That report includes the following map: 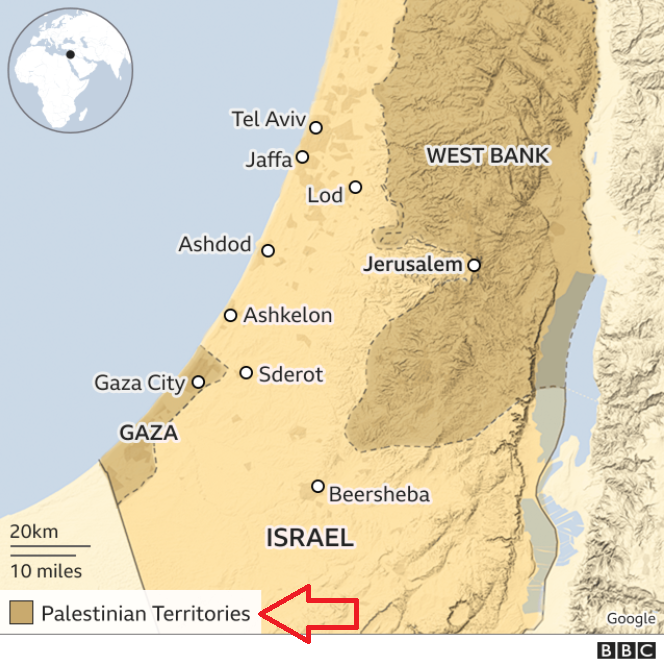 As we see the BBC presents all of Judea and Samaria – or as it terms that region, “West Bank” – as being “Palestinian Territories”, including the area near Latrun designated as ‘no-man’s land’ in the 1949 Armistice Agreement.

The BBC Academy “journalists’ guide to facts and terminology” provides the BBC approved definition of the term “Palestinian Territories”:

A significant part of the area portrayed on this map as “Palestinian Territories” is not “under the administration of the Palestinian Authority” as set out in the Oslo Accords. Those agreements between Israel and the Palestinians also state that territory which did not come under Palestinian Authority control will be subject to permanent status negotiations concerning borders and additional issues, which of course have yet to be resolved.

In other words, the BBC’s map misleads audiences with a speculative and inaccurate portrayal of the current status of territory which is subject to negotiations that have yet to take place.

At the bottom of this report readers find a section titled “Timeline: How the violence escalated”:

“The worst violence in years between Israel and the Palestinian territory of the Gaza Strip has seen dozens killed. It follows a month of spiralling tensions before open conflict broke out. Here is what happened in the lead-up to the fighting.”

That timeline begins on April 13th and ends on May 10th. Interestingly, previous BBC reporting on the unrest in Jerusalem only commenced ten days later on April 23nd. The timeline includes entries for rocket attacks from the Gaza Strip on April 15th and 16th which were not reported at the time and for additional attacks on April 24th which got minimal BBC coverage. Further rocket attacks on April 24th-25th and April 25th– 26th are not mentioned in the BBC’s timeline and neither are attacks that took place on the morning and evening of May 9th and the morning of May 10th.

An entry dated May 4th mentions incendiary balloons launched from the Gaza Strip “causing dozens of fires” which were also ignored by the BBC at the time.

The BBC’s timeline does not include the May 2nd terrorist attack at Tapuach Junction which resulted in the death of one Israeli teenager and injury to two others. It does mention the May 7th attack at Salem which did not receive any stand-alone coverage from the BBC at the time.