In recent days BBC audiences have seen repeated references to the power supply in the Gaza Strip.

May 17th:  Gaza hospitals ‘being collapsed and stretched’

“Gaza’s hospitals are being stretched to collapse as a result of airstrikes, a doctor has told the BBC.

Health officials in the Gaza Strip are making urgent appeals for supplies, amid reports of power blackouts and sewage running on to streets.”

May 17th: Israel launches new strikes on Gaza as calls for ceasefire grow

Palestinian officials in Gaza, meanwhile, said the overnight strikes had caused widespread power cuts and damaged hundreds of homes and other buildings. […]

The UN has also warned of fuel shortages in Gaza which could lead to hospitals and other facilities losing power.

Lynn Hastings, UN deputy special co-ordinator for the Middle East peace process, told the BBC that she had appealed to Israeli authorities to allow the UN to bring in fuel and supplies but was told it was not safe.”

“World leaders and humanitarian organisations have called for measures to prevent the deaths of residents and the chaos wrought by the destruction of buildings and infrastructure. […]

The United Nations has also expressed concerns about the damage to infrastructure in the already impoverished Gaza Strip, home to two million people. It said that 40 schools and four hospitals had been “completely or partially destroyed” in recent days. It also warned that fuel supplies there were running out, threatening basic services. […]

May 18th: In pictures: Fear and mourning as Israel-Gaza violence rages on

“Israel says its air strikes on Gaza have targeted Palestinian militants but power lines and main roads have also been damaged.” 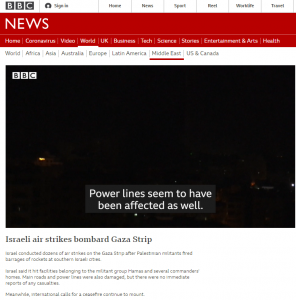 “Israel said it hit facilities belonging to the militant group Hamas and several commanders’ homes. Main roads and power lines were also damaged, but there were no immediate reports of any casualties.”

Paul Adams: “More Israeli airstrikes overnight in the Gaza Strip […] and targeting the homes of Hamas officials, but also to a certain extent infrastructure in Gaza, the main coastal road. Power lines seem to have been affected as well.” 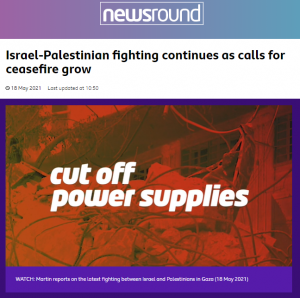 Martin Dougan: “The [Israeli] attacks have also cut off power supplies, roads have been damaged…”

“Palestinian officials in Gaza said the [Israeli] strikes had caused widespread power cuts and damaged hundreds of homes. The UN has also warned of fuel shortages in Gaza which could lead to hospitals and other facilities losing power.”

As we see, all of those examples attribute power shortages in the Gaza Strip to either Israeli airstrikes and/or fuel shortages due to Israel having closed the Kerem Shalom crossing. If, as suggested by two of those reports, the BBC is getting its information from “Palestinian officials in Gaza” – i.e. Hamas – that monochrome portrayal is hardly surprising.

While power lines may of course have been inadvertently damaged, Israel does not deliberately target civilian infrastructure.

Interestingly, none of those BBC reports inform audiences of additional factors which explain why people and hospitals in the Gaza Strip have seen their electricity supply diminish in recent days.

On May 13th the Times of Israel and other local media outlets reported that:

“The Gaza Strip will run out of fuel for its electricity generators by Sunday, an Israeli defense official told reporters on Thursday. […]

The lack of electricity is partially due to Israel’s closure of the Kerem Shalom Crossing, through which Gaza receives most of its fuel. According to Israel’s military liaison to the Palestinians, Hamas rockets also damaged power lines, cutting more than 230,000 Gazans off from electricity.

“Hamas rockets damaged power lines on the Israeli side [leading to Gaza],” clarified another security official, who spoke on condition of anonymity. […]

According to the official, three of the four turbines that normally run in Hamas’s power plant are currently out of service as a result of the fuel shortage. Gaza’s electric company shut down one of them as soon as Israel shut the Kerem Shalom crossing on Monday, in an attempt to conserve fuel.”

The company releases a statement this evening saying five of the 10 lines have been damaged, in the latest escalation of fighting and that the company cannot fix them because there is no access to the area.”

As also reported by the Jerusalem Post, in addition the situation affects the water supply.

“Gaza’s water supply has also been affected by the power cuts, with residents getting running water only on intermittent days, the official said.

Israel’s military liaison to the Palestinians, known by its acronym COGAT, added that Hamas had disabled Gaza City’s desalination plant, cutting some 250,000 residents off from their water supply.”

COGAT also noted that the power lines to sewage treatment plants have been damaged.

On the evening of May 17th Israel announced that it would open the Kerem Shalom crossing the next day to facilitate the entry of fuel, food and medicines into the Gaza Strip.

“Earlier on Tuesday, Israel temporarily reopened both the Erez and Kerem Shalom crossings into Gaza, allowing many truckloads of desperately needed fuel, medical equipment and animal feed into the enclave, according to Israel’s military liaison to the Palestinians, known formally as the Coordinator of Government Activities in the Territories.

The move was hailed by the United Nations in light of the dire humanitarian situation in Gaza, whose sole power plant has been rationing fuel and cutting electricity service to the beleaguered enclave. These power cuts have disrupted the flow of running water and sewage treatment in Gaza, according to the Israeli military.”

However the terrorist group from which the BBC has sourced information on power cuts brought those repeated efforts to a standstill. 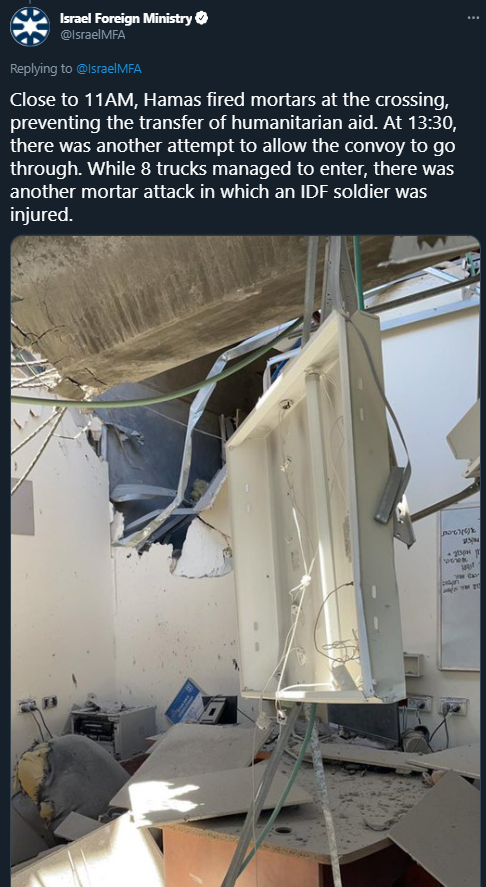 “Magen David Adom (MDA) medics and paramedics provided medical treatment to a 19-year-old soldier, and transferred him to Ashkelon’s Barzilai Medical Center in stable condition with a shrapnel wound to his upper body, after another barrage of rockets slammed the region surrounding the Gaza Strip and southern Israel on Tuesday afternoon.

The soldier’s unit was overseeing the distribution of humanitarian aid to the Strip, as Israel reopened the Kerem Shalom border crossing to allow for the transfer of gas, food and medicine to Gazan residents.

The IDF said that the mortars struck as a convoy of trucks carrying aid donated by international aid organizations was crossing into the coastal enclave. At least one mortar shell hit the Erez Crossing while several others were fired at the Kerem Shalom Crossing. Following the attack, the IDF suspended the entry of the rest of the trucks.”

The BBC reported those incidents without mentioning that the “Palestinian militants” who sabotaged that aid convoy were Hamas terrorists:

“Earlier on Tuesday, Israel briefly opened a border crossing into Gaza to allow a convoy of aid to enter. However, the crossing was closed again after it came under fire from Palestinian mortars and rockets. […]

Earlier on Tuesday, Israel opened the Kerem Shalom crossing to allow aid into Gaza, but closed it again after Palestinian militants fired mortars at the area. […]

Meanwhile at the Rafah crossing with Egypt, the only entry point to Gaza not controlled by Israel, a convoy of 15 lorries carrying fuel and 18 loaded with food and medicine entered the territory.”

“Israel has closed the Kerem Shalom and Erez crossings into Gaza just hours after opening them to allow in humanitarian aid.

It said it closed the crossings in response to a barrage of mortar shells fired by Palestinian militants into southern Israel, including at both the crossings into Gaza.”

The following day another attempt was made to transport aid into the Gaza Strip but once again Hamas terrorists fired rockets at the crossing and the effort had to be abandoned.

As we see, not only has the BBC failed to give its audiences the complete picture on Hamas’ responsibility for the fact that electricity and water are in short supply and sewage is flowing in the streets in the Gaza Strip, it has amplified Hamas’ script according to which that situation is exclusively the result of Israeli actions. And to top it off, the BBC then failed to clarify that it was Hamas that prevented the entry of much-needed fuel into the Gaza Strip.

“News you can trust”?